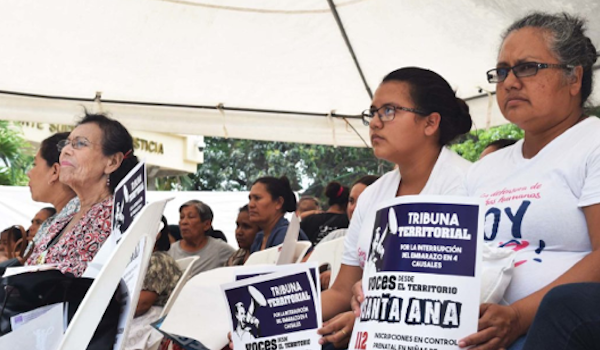 In a statement on 8 May 2017, Amnesty International said that the Salvadoran Legislative Assembly has a historic opportunity to reject the criminalisation of abortion and protect the health and lives of millions of women throughout the country, in light of a debate due to start this month which could result in the first steps being taken towards partial decriminalization of abortion. It is the first time in almost 20 years that there is a real opportunity to change this law.

The ruling party, Farabundo Martí National Liberation Front, tabled the bill in October 2016. The bill would decriminalize abortion on four grounds: if the pregnancy poses a risk to the life of a pregnant woman or girl, or there is a risk to her physical or mental health, or if the pregnancy is the result of rape or incest, or if the fetus would be unable to survive outside the womb. Another bill was tabled by anti-abortion Assembly members that would increase the criminal penalties to up to 50 years.

The debate on both bills was due to take place within six months, in two phases. First, the Commission on Legislation and Constitutional Issues would discuss the bills. If they approve one of them, it will go to the full Legislative Assembly for debate and a vote. The Commission meets every Monday. They had set a date of 8 May to begin these discussions and given themselves a month for this, but that date passed and no further date has as yet been set.

A Territorial Forum on women’s voices for the health and lives of women called upon Assembly members on 28 April to reject the anti-abortion bill and pass the bill for decriminalization of abortion on the four grounds as soon as possible, taking account of the views and technical and scientific reports issued by various health agencies, civil society organizations and international agencies, with regard to the need to regulate the termination of pregnancy when the health and lives of women are at risk.

WRITE NOW: Call on legislators to support the bill in order to respect, protect and fulfil the rights of women and girls.

> Urge legislators to end the total ban on abortion.

> Express profound concern that the rights of women and girls in El Salvador to life, health and freedom from discrimination, torture and ill-treatment will continue to be violated if the criminalization of abortion is maintained.

> Point out that according to the Salvadoran Ministry of Health, 36 pregnant women died from 2011 to 2015 after being admitted to hospital with pregnancy complications and chronic diseases because they were unable to terminate the pregnancy.

> Also note that the abortion ban has affected young girls who have fallen pregnant after being raped. A 2014 Reuters report found that 3 out of 8 maternal deaths in El Salvador were the result of suicide of pregnant girls under the age of 19, and girls aged 10 to 19 make up one-third of pregnancies in the country.

Copy the e-mail to:

> Diplomatic representative accredited to your country at local diplomatic addresses, and