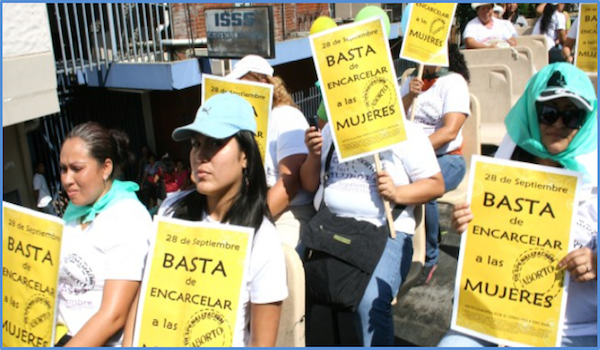 This year is the first time that this Central American country has openly debated abortion, forcing even conservative media organisations to cover the issue in editorials and primetime news programmes since abortion was made completely illegal almost 20 years ago.

“This is an historic moment. There’s been a qualitative shift – it’s not just women’s groups speaking out. Abortion has become a priority topic for a range of groups. It… feels like change. Politicians must make amends for the damage done to thousands of women … there is no going back,” said Sara García, a campaigner with the Agrupación Ciudadana por la Depenalización de Aborto.

In February 2017, CEDAW published its recommendations to the El Salvador government that it should decriminalise abortion at least in certain circumstances, and should expedite the adoption of the draft law tabled by the FMLN on four grounds to that effect. During CEDAW’s deliberations, the Agrupación, the Center for Reproductive Rights and the law firm Debevoise & Plimpton LLP submitted an expert report detailing how the extreme hostility exercised under the existing law put the lives and health of Salvadoran women at grave risk.

In March, the Foundation for the Study of the Implementation of the Law (FESPAD), together with the Association of Women Lawyers (AMA), created a Forum for dialogue between Salvadoran and international jurists on the subject of decriminalisation of abortion, which called on the Members of the El Salvador Parliament to legislate for the health and lives of women, girls and adolescents by approving the proposals tabled earlier this year to decriminalise abortion on four grounds.

The Forum, entitled Constitutional Guarantees, addressed the collision of rights between pregnant women and the developing child they are carrying, and the gulf between the country’s national legislation and international conventions on reproductive rights that currently exists.

“The termination of pregnancy should be permitted in cases in which the pregnancy threatens the life of the pregnant woman, or when the fetus is unviable due to fetal anomalies,” said Ricardo Iglesias, Salvadoran constitutional expert. He held that while some rights from the moment of conception are recognised, these rights are not absolute, and they do not take precedence over other rights, including those of the pregnant woman.

On 20 March, the Committee on Legislation and Constitutional Issues of the Legislative Assembly held a consultation on the two pending bills to reform Article 133 of the Penal Code in relation to abortion, the one a bill to increase the criminal penalties for abortion, tabled by Deputy Ricardo Velázquez Parker of the ARENA party, the other a bill to decriminalise abortion on four grounds, tabled by Lorena Peña of the FMLN.

The FMLN bill would allow abortion in cases of risk to the life or health of the pregnant woman, fetal anomaly incompatible with life, pregnancies resulting from rape or trafficking, and for girls and adolescents who would have to face motherhood imposed by sexual abuse.

“In regard to these two initiatives, we believe in and we support the amendment tabled by Lorena Peña, as it is a step forward on the issue and would provide pregnant women with the right to have an abortion on these four grounds,” said Abraham Abrego, Director of FESPAD. Although he acknowledged that these grounds are still limited, it is an improvement on the current situation and would give the necessary legal security to both women and abortion providers in high-risk cases.

The Agrupación also reported on 21 March 2017 that María Teresa Rivera, 34, the most recent women among Las 17 to be released from prison in 2016, after serving four and a half years of a 40-year sentence on charges of aggravated homicide, was granted asylum by the government of Sweden for herself and her 11-year-old son.

Then, on 24 March, they reported that two representatives of the US Congress, Debbie Wasserman Schultz and Norma J Torres, delivered a letter signed by 21 members of Congress, including the senior member of the Foreign Affairs Committee of the House of Representatives, Eliot Engel, to the President of El Salvador, Salvador Sánchez Cerén, and the President of the Salvadoran Congress, Guillermo Gallegos Navarrete. The letter asked them also to support the efforts to decriminalise abortion on four grounds. In the letter, these members of the US Congress expressed their opposition to the total ban on abortion in El Salvador and called on President Sánchez Cerén to work with civil society and the Salvadoran Congress to advance the FMLN amendments. The letter also emphasises that while the decriminalization of abortion on the four grounds is not sufficient to guarantee access to all reproductive health services for Salvadoran women, it does represent a significant improvement and brings El Salvador closer to complying with international human rights standards.