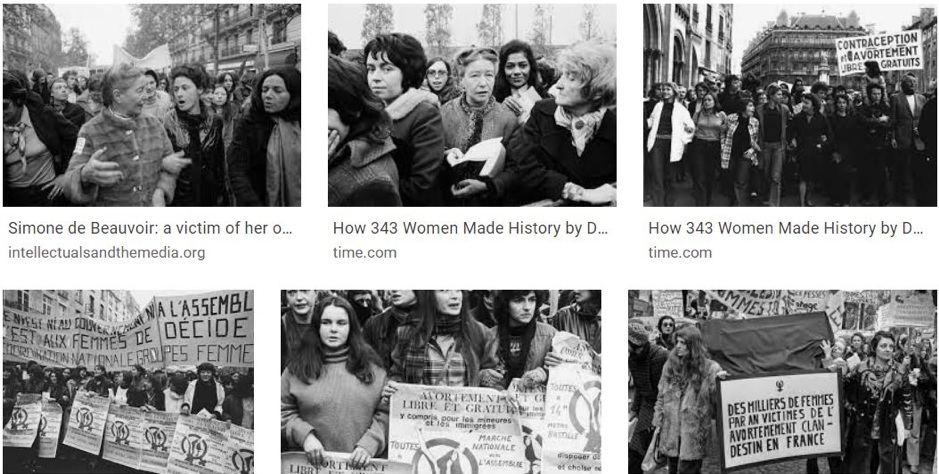 Fifty years ago, 343 women in France, intellectuals, politicians and artists, had the courage to sign a petition written by Simone de Beauvoir, which was read out in a public space, admitting they had had an illegal abortion.

Claudine Monteil, one of the signatories, was 21 years old at the time and the youngest member of the group that included many famous personalities such as Gisèle Halimi, Catherine Deneuve and Simone Veil.

The impact of the Manifesto, published in the magazine Nouvel Observateur on 5 April 1971, exceeded the expectations of the 343 women, who all risked prison at the time. “We did not imagine that it was going to become historical,” Monteil told Efe, a multimedia news agency. “We hoped it would be talked about. Its great success was that everyone was forced to comment on it. Women in their 70s and 80s began to tell their granddaughters that they had had an abortion. Its impact was symbolically very strong.”

The manifesto said that one million women resorted to unsafe abortion each year in France. It said:

Some of the signatories lost their jobs, their families stopped talking to some of them, and some had to abandon their studies because their families stopped helping them financially. All of them were accused of being irresponsible, exhibitionists, and even called sluts, while the Vatican Radio claimed that France was going down the road of genocide.

Even so, the Manifesto of the 343 was an inspiration for the feminist movement, and also for a second manifesto on 3 February 1973 by 331 doctors, who publicly declared their support for abortion rights and said they were part of a national network in France who were providing illegal abortions safely: “We want freedom of abortion. It is entirely the woman’s decision. We reject any entity that forces her to defend herself, perpetuates an atmosphere of guilt, and allows underground abortions to persist…”

In 1971, the feminist group Choisir (“To Choose”) was founded by Gisèle Halimi, to protect the women who had signed the Manifesto. In 1972 Choisir’s campaigning greatly influenced the passage of the law allowing contraception and legalising abortion, initially up to ten weeks, tabled by then Health Minister Simone Veil in 1974, which went into effect in January 1975.