Home » News » EL SALVADOR – Interview with Sara García Gross: « In El Salvador, when a woman falls pregnant, she loses her right to life. » 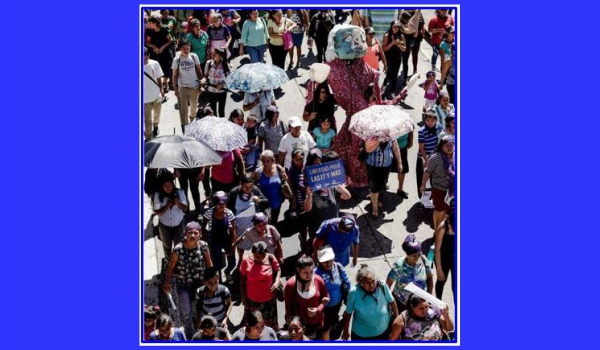 El Salvador is ruled by what began as a leftist party and over the years has passed a series of policies in support of women’s rights. But on the subject of abortion there has always been silence. Although they were the first party to introduce an abortion law reform bill after 20 years in power, they then postponed the debate with the excuse of introducing other priority issues, which shows that fundamentalist pressure on them is strong and influential. Among the fundamentalists, there is not only the Catholic Church but also groups related to Opus Dei, who have organised campaigns to discredit and disparage our work on sexual and reproductive rights.

Pope John Paul II visited El Salvador; he was totally anti-abortion. Streets bear his name. Currently, there is a process of canonisation of Bishop Romero, which had already been declared a saint by the people, so it was not even necessary for the church to recognise him. The fundamentalist movement takes advantage of his popularity to promote anti-abortion messages.

Abortion is completely prohibited. The Constitution, Article 1, says that life is protected from the moment of conception. This means that, in El Salvador, when a woman falls pregnant, she loses her right to life.

The Ministry of Health has a policy to provide women with contraceptives, but there are still barriers to accessing them, especially for the youngest women. If they want contraceptives, they will be asked: “Who are your parents, why are they not paying attention, why do you want contraceptives when you are not entitled?” The morning-after pill is only allowed in cases of rape. We are the Agrupación Ciudadana por la Despenalización del Aborto (Citizen’s Group for Decriminalisation of Abortion). We currently know of 24 women in imprison, sentenced for illegal abortion, some for up to 30 years. This demonstrates unequal access to justice. They are denied the presumption of innocence and sentenced on the presumption of guilt. Our movement has identified a range of rights violations in these cases. For example, they have the right to a lawyer, but there are a lot of irregularities. In many cases that we have become involved in, the woman is found guilty of homicide, which is why the sentences are so heavy. Recently, we accompanied Teodora through her trial, she had been sentenced to 30 years, and Teresa, for 40 years. Teresa was the one who had the most trouble; she didn’t even know she was pregnant.

Our organisation has three main activities. One is legal action to try and get women out of prison. The second is challenging the negative way the people think about abortion. The third is a political campaign to change the law on abortion.

We now call the Campaign “Las 17 and More”. In 2014, when we began, we found 17 women in prison for abortion. All were young and had been living in very difficult conditions of poverty. At that time, we called the campaign “Las 17”.

We are in touch with other colleagues nationally, and recently we had a member of Parliament who was involved in the whole process of trying to decriminalise abortion. We also have contact with colleagues in Mexico City, where abortion is legal and accessible. And we have links with people in Sweden because that country granted political asylum to Teresa, who was forced to flee because the Attorney General wanted to send her back to prison after her release. The Swedish Government recognised that it was dangerous for Teresa to return to El Salvador unless the law on abortion changes.

Translated in full from French.