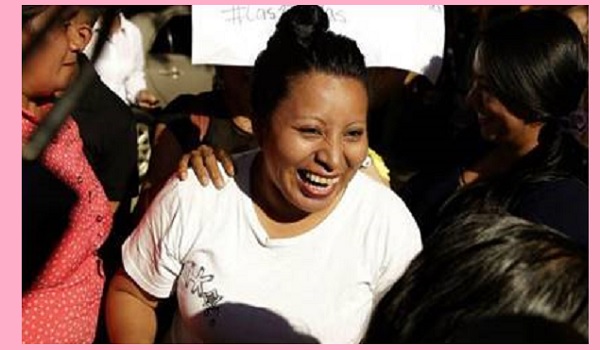 Teodora del Carmen Vásquez was a cook in a school cafeteria. Nine months pregnant, on 13 July 2007, she was serving lunch when she had sudden terrible pains. She tried to call the emergency services many times, who never came, and finally went to the toilet with blood running down her legs, and fell unconscious. When she awoke, she was surrounded by police, who accused her of asphyxiating the baby she had lost. She was detained in prison on 21 July, aged 24, to await trial. She was convicted of aggravated homicide on 1 February 2008 and sentenced to 30 years in prison, in spite of a lack of evidence of any crime.

On 15 February 2018, she regained her freedom after serving 11 years for a crime she did not commit. The Supreme Court of Justice and the Ministry of Justice and Public Security commuted her sentence, they said, because: “There are powerful reasons of justice, equity and law in nature that justify it.”

The Citizen’s Group for the Decriminalisation of Abortion has supported Teodora since 2014 and repeatedly defended her innocence. In 2014, the Group asked the Supreme Court to pardon her, but they rejected the appeal. Then, on 18 November 2015, the Group requested the commutation of her sentence. In May 2017, her solicitors requested a review of the judgment due to serious judicial errors and lack of legal and scientific criteria; this has yet to be heard. Then the Court commuted her sentence on 31 January 2018.

In spite of a lack of any evidence of a crime, the presumption of innocence was not made in her case. Teodora is not the first Salvadoran woman to be unjustly condemned by the court that first heard her case. There was Isabel Cristina Quintanilla, who was also sentenced to 30 years in prison on similar grounds, who for reasons of justice and fairness, and considering that the penalty was excessive, severe, disproportionate and unfair, finally had her sentence commuted to three years in prison.

For the Citizen’s Group, the commutation of the sentence is important because it allows her to return to her family. But it is not enough, because it does not recognise her innocence. For this reason, further legal action will be taken to prove she did not commit any crime and is granted reparation for reintegration into society. The Group reiterates that the criminalisation of abortion, miscarriage and stillbirth in El Salvador particularly punishes women with limited economic means, and those who do not have access to help from the education, health and justice systems.

Since abortion was prohibited in all circumstances in 1998, there have been about 30 such cases in which the prosecution has accused women who have lost a baby of murder or aggravated homicide, with prison sentences ranging from 30–40 years.

On 3 March 2017, the Committee on the Elimination of All Forms of Discrimination against Women (CEDAW) called on El Salvador to decriminalise abortion, introduce a moratorium on the application of the law and review the detention of women who are still imprisoned for offences related to abortion, in order to ensure their release. The Citizen’s Group has promised to continue to fight to prove their innocence.

The Group also told Al Jazeera: “In March 2018, we expect Maya Veronica, another woman jailed for abortion, to be released through the same legal process.”