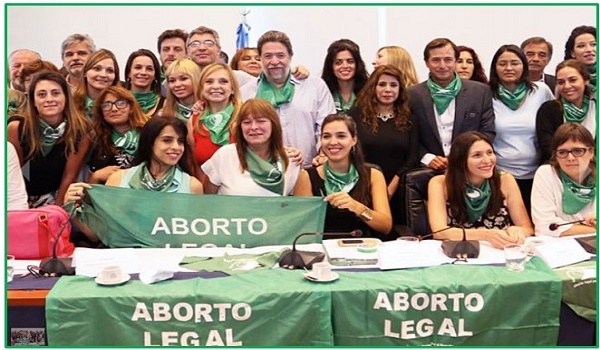 On 20 March, members of three different committees in the Chamber of Deputies of the national Congress will start deliberations on abortion law reform. Along with the bill tabled by the National Campaign for the Right to Legal, Safe and Free Abortion, which takes abortion out of the criminal law and allows abortion on a range of grounds and was endorsed by 71 Deputies, other proposals tabled will also be discussed. The National Campaign is calling for supporters to gather outside the Congress building with the green handkerchiefs, which are the symbol of the Campaign.

As regards which grounds for abortion they believe should be permitted, the poll showed the following: 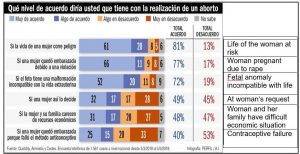 The poll also found that the views of legislators closely reflected the views of the public – 60% support legalisation and 40% do not.

Some 87% of those polled had seen news reports on the issue in the days before the poll. Almost half (48%) knew someone who had had an abortion. Most interesting, perhaps, the poll found that the more informed respondents were on abortion, the more likely they were to support legalisation.

Importantly, on the question of whether the churches should influence or remain on the periphery of the debate, 63% thought the Catholic Church should abstain from having an opinion, 23% thought they should seek to have an influence and 14% didn’t know. Lastly and also importantly, 59% thought that legislators should cast their vote based on the rights of women (50%) and not based on their own personal religious views (9%).