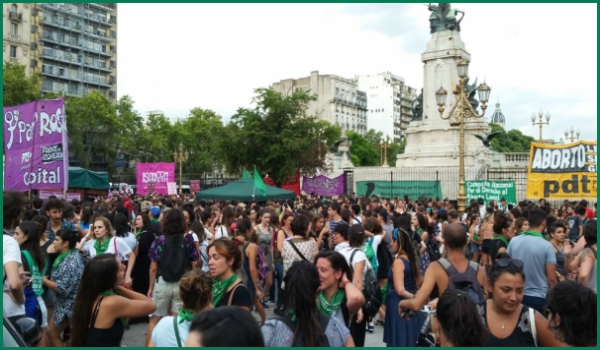 In 2016, 46 women died from unsafe, illegal abortions in Argentina. All of them could have been avoided. Mauricio Macri, President of Argentina, is against abortion, but all around him there is a very strong movement and a new generation that are pushing for Argentina to become a leader in the region on abortion law reform, as they were with gay marriage. The abortion rights movement in Argentina seeks to go well beyond Chile and calls for a law that allows abortion on request in the first 14 weeks.

In the Congress, where resistance to change and the pressures of the Catholic church still have weight, the pressure is growing every day. Last weekend it exploded in a cheerful and organised manner in front of the Congress building and on social media with the slogan #AbortoLegalYa (Legal abortion already!) that gained the support of many famous politicians and journalists, a senior judge, a TV star and some important members of the Government.

The demonstration, called by the Campaña por el Derecho al Aborto Legal, Seguro y Gratuito (Campaign for the Right to Legal, Safe and Free Abortion) brought tens of thousands of women and girls, and hundreds of men, from across the generations, but especially young women, in front of the Congress building last weekend. The numbers greatly exceeded the expectations of the organisers, who had printed 10,000 scarves for everyone to be able to hold above their heads, but they had all been taken within minutes.

The organisers told the crowd this was how the law would be changed, through mass support. The demonstration was festive, with dyed hair colours, garlands of flowers, faces with glitter. The social media campaign garnered 78,000 tweets within a few hours and lasted all day.

The demonstration was timed to precede the start of the next legislative cycle, in which the Campaign will table, for the seventh time, a bill to decriminalise abortion. The last one was tabled in June 2016.

The current bill says (in brief):

Article 1: In the exercise of the human right to health, every woman has the right to decide voluntarily to terminate a pregnancy during the first 14 weeks of gestation.

Article 2: The health system must provide an abortion within five days of a request.

Article 3: The legal grounds after 14 weeks: i) rape – a signed statement by the woman is the only requirement; ii) risk to life or physical, emotional or social health; and serious fetal anomaly.

Article 4: The woman must give written consent.

Article 6: No judicial authorisation is required in any case.

The Campaña have requested a special congressional session on March 8th to discuss the bill with all legislators.

President Macri has announced today, 23 February, that legislators from his political party have “a green light” to vote according to their own consciences.