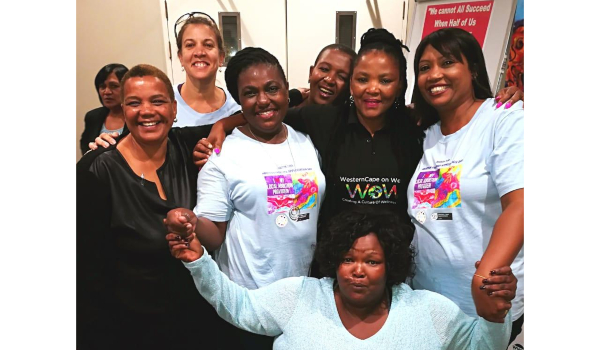 On 7 July 2019 the Weekend Argus reported that the Western Cape Provincial Minister of Health, MEC Nomafrench Mbombo, had authorised the addition of seven new facilities to provide safe, legal termination of pregnancy to women across the Western Cape. This was as a result of “calls for improved access to facilities where pregnancy can be terminated safely to curb the need to seek out illegal and unsafe terminations, which often result in maternal death and infection”.

The Sexual and Reproductive Justice Coalition engaged MEC Mbombo at our annual Abortion Provider Appreciation Day event in March 2019 and also in their Reproductive Justice Election campaign, directed towards political parties. There are serious health systems challenges in South Africa and issues of reproductive justice continue not to be central to programming and planning.

The MEC’s authorisation will lead to the establishment of additional clinics in the City of Cape Town and more outlying areas of the Langeberg, Drakenstein and Witzenberg (fruit and wine growing areas). This is good news from the provincial government of the Western Cape, which clearly states: “This is another step by government in protecting women’s and girls’ sexual and reproductive rights” in the article. The province currently has 103 public health facilities that render the service free of charge, in addition to 22 private clinics.

Yet there is more demand than supply of services and a context of stigma persists in accessing services. According to the National Department of Health 105,358 illegal abortions were carried out in the Western Cape in 2016/7. It was also reported in the article that it was not uncommon for newborn foetuses to be found discarded. The article notes that one was found in the bush and another in a communal toilet. A community member also said it was not uncommon to make such gruesome findings in drains, bushes or toilets, as young girls still turn to having their pregnancies terminated illegally and were given medication to take to their homes that caused them to abort. They then would discard the fetus for fear of discovery. Spokesperson for the MEC, Nomawethu Sobukwana said: ‘Women are advised to go for safe, legal abortions rather than ‘backstreet’ abortions that are likely to endanger their health and lives.’”

MEC Nomafrench Mbombo is a trained abortion provider herself and clearly has understood the need to provide and implement services to address reproductive justice by responding so soon after the elections to increase access for women. Yet important questions remain and need to be asked. Firstly, given the orientation of the National Abortion Clinical Guidelines that were drafted last year, it was recommended that all health facilities should be providing medical abortion pills. Medical abortion is provided for the first trimester of pregnancy and this can take place safely at home.

Generally women are turned away from facilities if they are later and in the second trimester, and then they turn to informal providers. Water and sanitation and also land is clearly a reproductive justice issue with women needing a home and privacy should they have a medical abortion and need to dispose of the fetus and products of conception whilst at home.

At a recent National Department of Health SRHR technical task group meeting, UNFPA and National Department of Health (NDOH) leadership said that the abortion guidelines, which were finalised in October 2018, had been delayed because of the ECHO trial results. This does not make sense. Many international NGOs in South Africa working on reproductive health have been funded to work on implementation but have been limited in the work they are able to do in holding government to implement and account. It is unacceptable for this amount of time to pass – women are bearing the brunt of stock-outs of reproductive health commodities, and government is not leading in the registration of generics (e.g. new contraceptive methods and medical abortion drugs) to enable better stewardship and implementation. We should not be relying on international NGOs, donors and private pharmaceutical companies to be doing this work.

The Budget Vote and Policy Statement delivered by the Minister of Health, Dr Zwelini Mkhize, on 12 July in parliament stated: “We have the confidence to commit to this cause despite the existing challenges of the shortage of staff and medicines, ageing infrastructure, inequity of access and inadequate equipment, amongst others.”‘ Noting intersectoral collaboration, the Minister of Social Development, Ms Lindiwe Zulu, in presenting her Budget Vote and Policy Statement on 11 July noted: “Some of the policy responses are contained in this budget we are presenting today, including the work of the Inter-Ministerial Committee on Population Policy. We will continue to work towards the realisation of the full range of sexual and reproductive health services and rights for all.”