Today is Honduran Women’s Day: an unjust Constitutional amendment that disregards women’s lives must be rejected

After the decision by the Argentine Congress on 29 December 2020 to legalise abortion for both public health reasons and in support of women’s rights, everyone is waiting to see what the rest of Latin America will do. Responses from Mexico, Brazil, Jamaica – and now Honduras – have already become public. The response from the Congress of Honduras is bad news for all women and girls in the country and in the region – it shows a complete disregard for Honduran women’s health and lives. Yet ironically, it is due to be ratified on Honduran Women’s Day without consultation and with undue haste.

In every country in Latin America, there is a strong women’s movement that has been calling for safe and legal abortion for many years. Although legal reform has been slow, due to the powerful influence of conservative religious and political forces, many changes have still taken place.

Deaths and serious complications from unsafe abortions have been greatly reduced since the advent of medical abortion pills. In Argentina, even though the bill to reform the law was defeated in the upper chamber of the Congress in 2018, a journalist observed that abortion had been legalised in the streets. Tens of thousands of citizens were demonstrating in support of law reform, especially young women. When a new president was elected almost 18 months later, he promised to reform the law. The women’s movement, still actively supporting reform, pressured him to make good on his promise, and at the end of December 2020, it finally happened.

The reaction in Latin America has been strong, both positive and negative. In Honduras, one of the few countries left in the world that currently does not permit abortion on any legal ground, even to save the life of the pregnant woman, a senior government official reacted by tabling an amendment to the Constitution to ban all abortions in such a way as to make it impossible to repeal or amend.

Clearly, this was a reaction to the law reform in Argentina. Otherwise, why do it now and in such a hurry?

You can listen to the “debate” here in Spanish. The value of “la vida (life)” was emphasised with religious overtones by one speaker after another. But whose life? Not the life of the pregnant woman, on whose healthy, living body every pregnancy is totally dependent; her life was not even mentioned. Not the lives lost from dangerous abortions. Some 8,600 women presented to a hospital for complications of unsafe abortion in Honduras in 2017. Their lives will not be mentioned, let alone valued today, on Honduran Women’s Day. Did it matter if ‘conception’ was the consequence of rape or defilement? No. Did it matter if the woman already had children and could not cope with another? No. Did it matter if she was a child herself and was unlikely to survive the birth? No. Nor was concern expressed for the life of children after birth either.

Somos Muchas (We Are Many) is a national coalition of women and women’s groups who stand for human rights, full citizenship, autonomy, gender equality and justice for women. Here is what we have to say about the passage of this bill:

In the few days since the bill was tabled, we gathered signatures internationally to oppose it. We share them now to prove that we are far from alone in our views, but supported by hundreds of groups in Honduras and across Latin America, and international women’s health groups globally.

We will continue to advocate for safe and legal abortion for women and girls as an essential form of health care, which is supported by the World Health Organization on public health grounds, and by every human rights body in the world.

Somos Muchas (We Are Many)
Tegucigalpa, Honduras

HONDURAS: International Statement against the Proposed Reform of the Constitution (Article 67) on the “Absolute and Eternal Prohibition of Abortion”

On 10 January 2021, the Deputy for the National Party, Mario Pérez, presented a bill to the National Congress that would create a Constitutional “shield that makes it impossible to legalize the practice of abortion on the grounds that this practice is against human nature”.

In response, we the following international organizations, in support of all the girls, adolescents and women of Honduras, state the following:

I. The National Congress of the Republic of Honduras has the constitutional obligation to legislate within the institutional framework of the rule of law and with the guarantee of the full democratic rights and sovereignty of the Honduran people.

II. In addition to creating more obstacles to accessing legal and safe termination of pregnancy, the bill as presented includes a clause that would prevent future generations and a national constituent assembly from exercising the rights and powers of citizenship. In particular, this constitutional reform is intended to permanently deny women and girls the right to advocate for a procedure (abortion) that concerns and affects them exclusively.

III. We want to remind Señor Mario Pérez that, according to the judgments SCO-406-2013 of 28 June 2013, SCO-1343-2014 and 0243-2015 of 22 April 2015, and SCO-1165-2014 of 23 June 2017 of the Constitutional Chamber of the Supreme Court of Justice of Honduras – as well as Article 4 of the American Convention on Human Rights and the interpretations of Article 4 by the Inter- American Court – these judgments acquire juridical validity as a source of domestic law and have constitutional hierarchy since they are part of the so-called “constitutionality block”.

IV. We also want to remind him that any law, reform, regulation or judicial or administrative resolution cannot contravene recognized rights, particularly those recognized in international treaties such as the American Convention, since by virtue of Article 27 of the Vienna Convention on the Law of Treaties 1969, a State “may not invoke the provisions of its domestic law as justification for the breach of a treaty”.

V. We call on the Honduran State to comply with its obligation to observe the legal and social standards established by international human rights law and to suspend a debate that is contrary to the exercise of citizenship by women.

VI. We demand that the National Congress of Honduras fulfil its responsibility to guarantee the enjoyment of justice, freedom, well-being and human dignity of women and girls in line with its global commitments to gender equality and human rights. We further demand that the National Congress of Honduras eliminates the practice of promoting bills based on moral arguments that ignore international standards. This would allow them to direct their decisions not towards the absurdity of comparing abortion with murder and of conceiving of women as mere instruments of procreation, but towards the effective protection of the health, lives and freedom of women and girls.

List of organisations that have endorsed the SOMOS MUCHAS petition on Honduras: 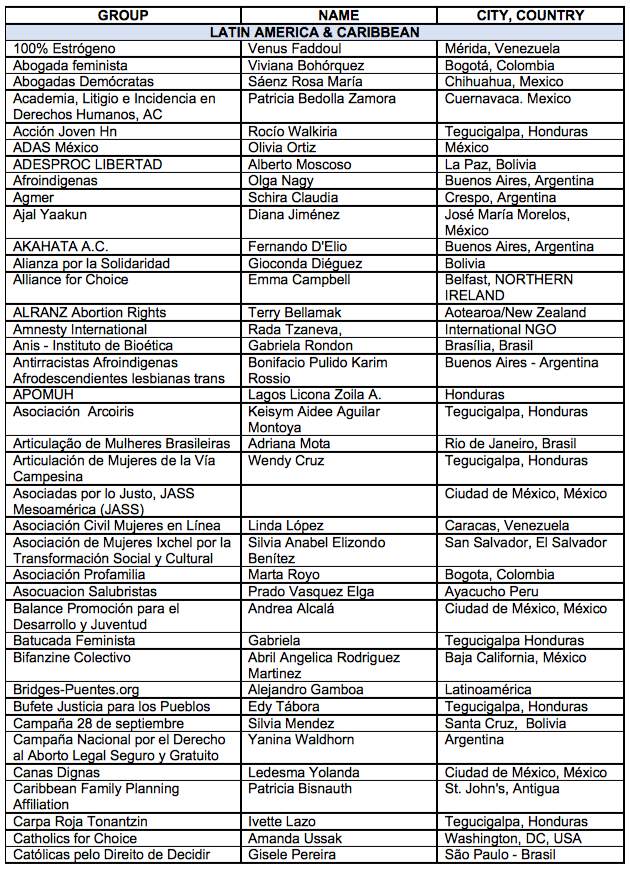 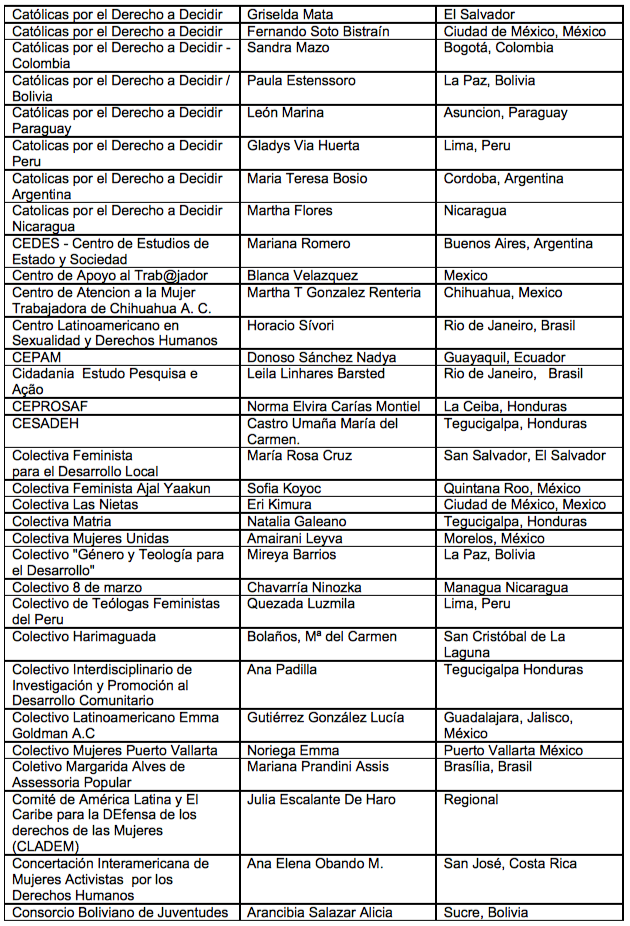 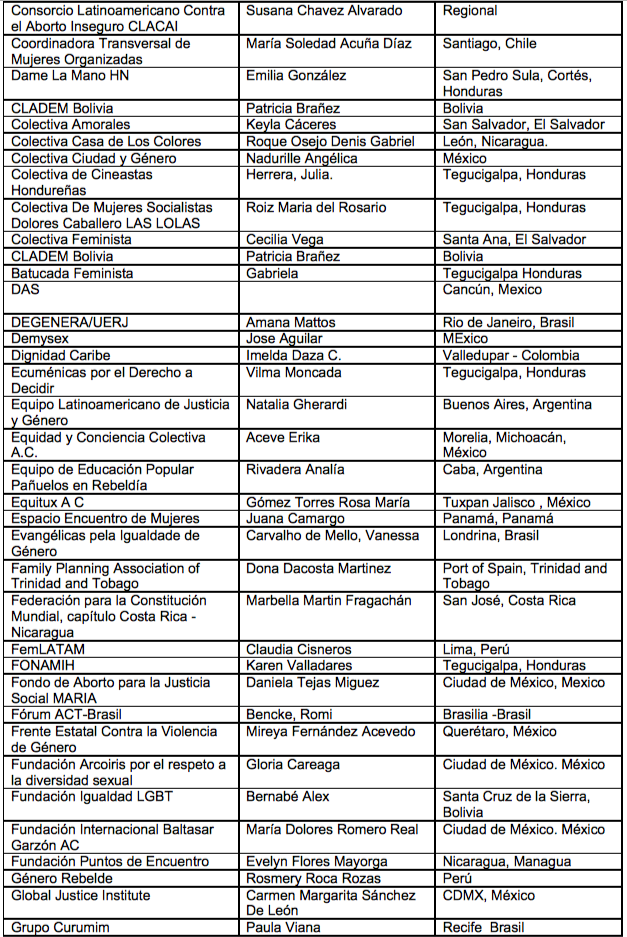 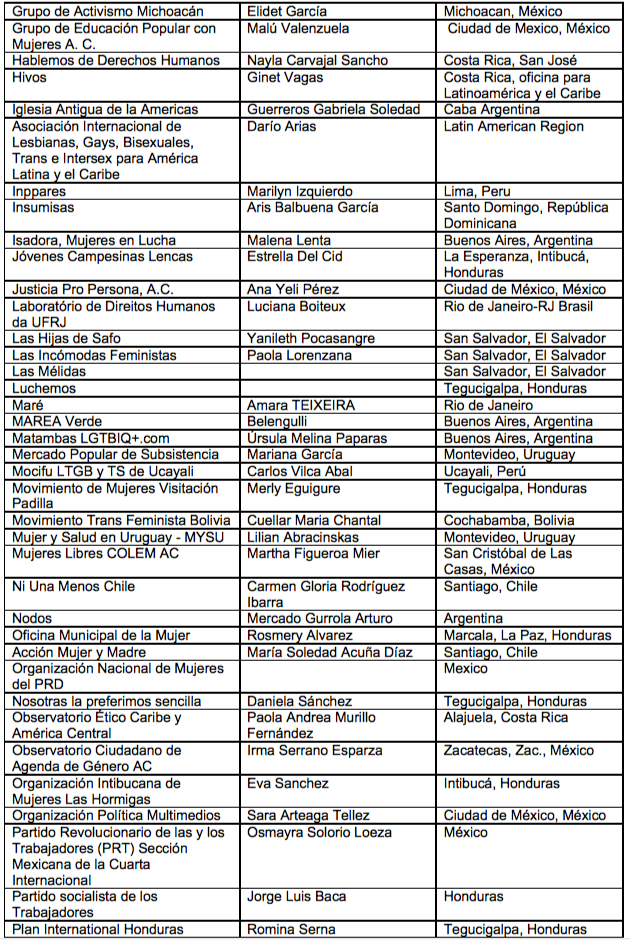 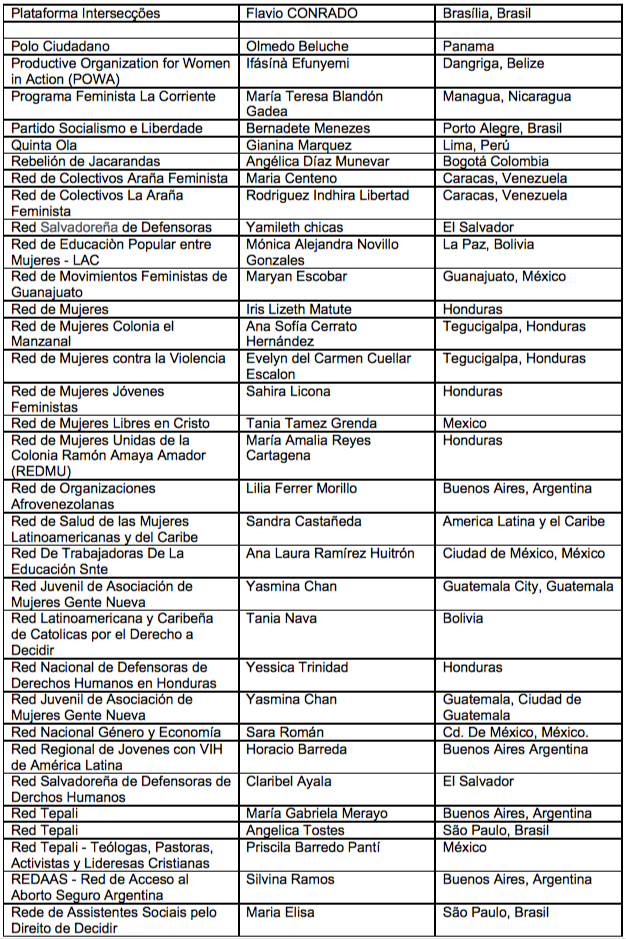 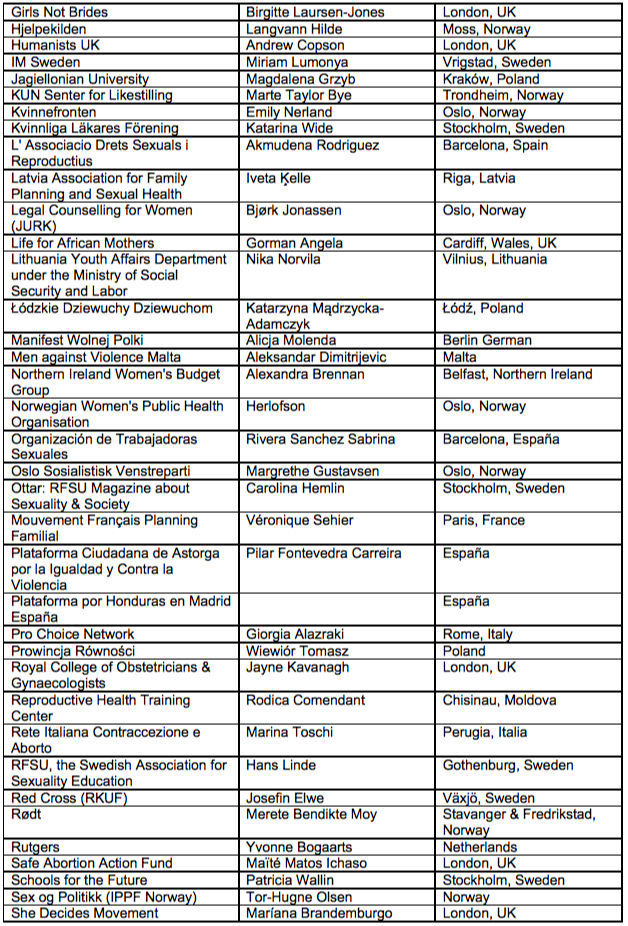 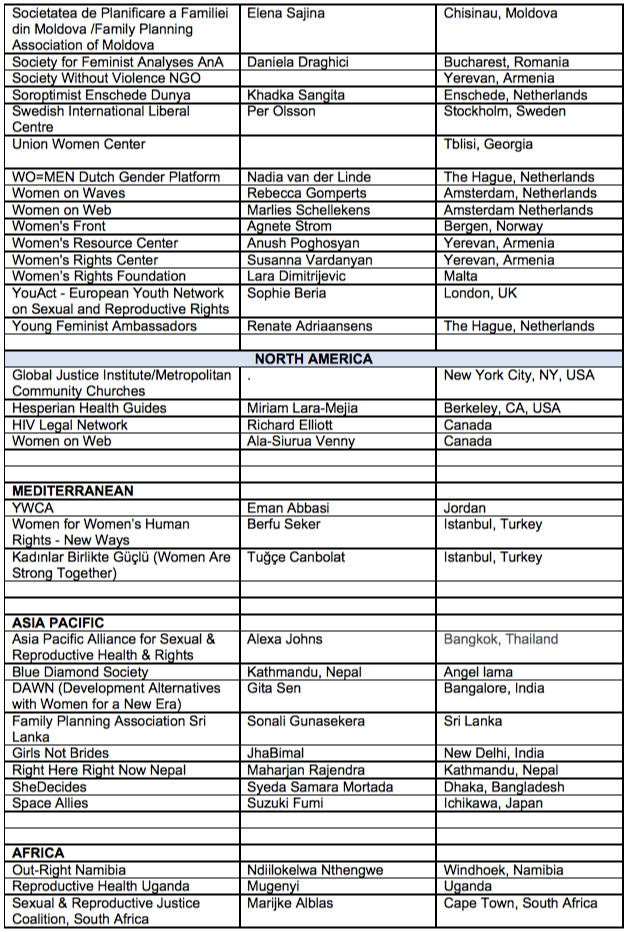 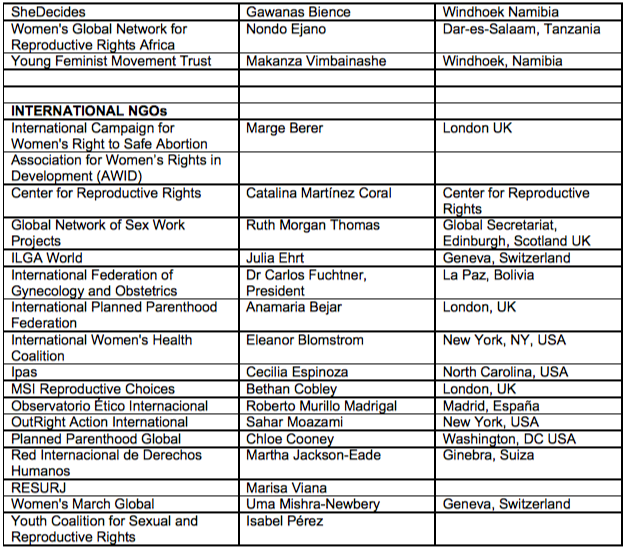