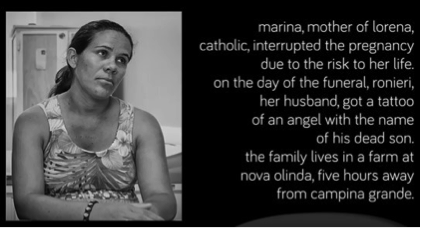 by Vozes da Igualdade, March 2016Portuguese version || English versionThe film follows a number of women who were infected with Zika at different times during their pregnancies. It was filmed in the maternity clinic of Dr Adriana Melo, Faculty of Medical Sciences, Campina Grande Paraíba. Dr Melo diagnosed the first case of Zika-related syndrome in Paraíba in 2014. The film opens with her doing an ultrasound scan for a woman in late pregnancy who has a diagnosis of uncertain severity, and they talk about taking one step at a time, and the fact that the woman is helping with research and finding answers in the hopes other women do not have to go through this situation in the future. Dr Melo then does a scan for another woman whose diagnosis is very severe microcephaly, whose baby would not survive, and whose life is at risk due to serious fluid retention. She is going to have a late abortion. The film then moves on to interview a number of women, all young, some still adolescents, with babies with Zika-related syndrome, who talk about their pregnancies, how they coped with the news, and their feelings and those of their husbands about their decision to continue the pregnancy since the birth of their babies. A heart-stopping film.