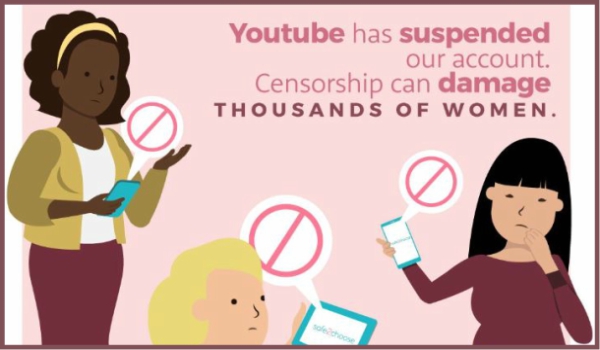 safe2choose reported on 23 February 2018 that their account on YouTube is the newest victim of anti-abortion censorship. The company has already refused their first appeal to have the account reinstated, and they are now planning their next moves. The video that triggered the suspension is a testimonial from a 42 year-old Malaysian woman who thanked safe2choose for supporting her through an abortion. There was no mention at all of the abortion process itself, which really made them ask: how arbitrary can these decisions be?

It seems YouTube does not provide an e-mail address to contact directly – so safe2choose wrote to their Help Center (where their first appeal was made). They had no luck. On their website, YouTube provide a postal address and a phone number.

safe2choose have heard that comohacerseunaborto.com had to make a legal appeal to Google Argentina in order to get their video reactivated. safe2choose have also contacted their legal team and are deciding what their next steps will be.

As you may know, the International Campaign published a letter addressed to YouTube on 3 February, about previous attempts of censorship of videos by Women on Web, Women on Waves and comohacerseunaborto.com. Over 45 individuals and organisations signed the letter, including safe2choose, but even if it reached the YouTube executives, they did not reply. safe2choose has suggested it might be time for us to think of stronger reactions – especially with 8 March coming. We agree and will be in touch about this soon.

Meanwhile, safe2choose have written a blog to expose this arbitrary move and shared some materials on their social media channel. They would be enormously grateful if you could help by sharing them too:

Here is the video that was taken down: 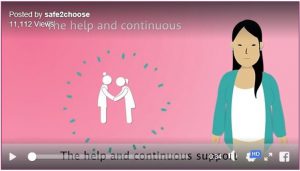 Here is YouTube’s notification of the suspension of their account: 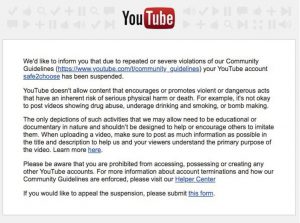