Different women have different experiences of abortion. Let’s create judgment-free spaces for them to talk about it. One of the easiest and most powerful ways to break stigma is to simply talk about abortion. Here, five women narrate their abortion stories in a powerful video. #Sept28 #LetsTalkAbortion 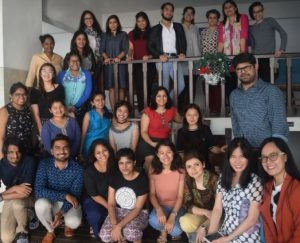 … The workshop began with a foundational understanding of gender, sexuality and how patriarchy functions. Led by a stalwart in the Indian grassroots women’s movement Ms Manisha Gupte, the participants explored how patriarchy played out differently in their respective countries, noting the similarities and differences. They discussed how controlling women’s sexuality (and therefore mobility) was a fundamental tenet of patriarchal functioning. The control of women’s fertility and reproductive choices then, plays out in every country in the world, to varying degrees. From pro-natalist policies that encourage reproduction to anti-natalist policies that discourage reproduction, women’s reproductive function is always influenced and directed by the patriarchy – both in private (by husbands and families) and in public (by the State).

Conversations on reproductive control naturally led to those on abortion, and why the access to abortion should be an unquestioned right that every person with a uterus should have. As the participants were all gender advocates in their own countries, they all discussed the abortion laws in their respective countries.

The workshop included a number of interesting activities that challenged participants’ inherent biases and beliefs. One trick exercise asked participants to pick three out of six viable candidates for abortion that would be sanctioned by the State most easily, in the face of a hypothetical nationwide ban on abortions starting midnight. Participants were then told that the premise of the activity itself ought to have been challenged – and by choosing three out of six candidates, they were falling back into a needs-based approach instead of staying firm to a rights-based approach that would allow all women to unequivocally demand safe abortion as their right. Another activity asked participants to distinguish between what they believed to be a fact and what they believed to be a value. While it started out with relatively easy statements such as ‘It is women’s fault for experiencing sexual violence’ that were easy to oppose, the statements got progressively more nuanced.

From building a solid medical foundation for the participants to effectively carry out their advocacy efforts, the latter two days saw workshops on strategy, communication, networking, social media and internet privacy – all essential elements of advocacy actions. These were largely led by Dr Shilpa Desai Shroff – ASAP Assistant Coordinator. Participants studied effective media campaigns to learn how to subvert patriarchal messaging and create feminist responses to them. The participants, christened ASAP Youth Champions, brainstormed on how to form international and local networks and how their respective networks could benefit each other. Participants also worked together to create abortion rights-related content for social media propagation, and came up with funny, poignant and informative memes, articles, artwork, videos and songs that stressed the right of women to have access to safe and legal abortion services.