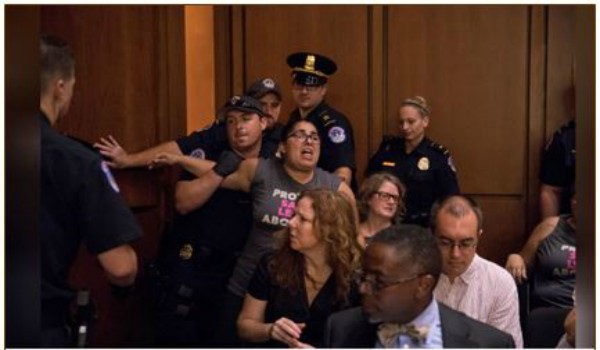 After lawmakers on the Senate Judiciary Committee questioned Supreme Court nominee Judge Brett Kavanaugh for three days, they listened on 7 September to testimony from multiple witnesses for and against him. These included Rochelle Garza, the lawyer who represented the undocumented 17 year-old girl seeking an abortion, whom he ruled against last year. The case began as a suit against the Office of Refugee Resettlement over their decision to block the girl, who was detained in their facility, from receiving an abortion, by refusing to transport her to her appointment, even after she had received approval from a judge. The abortion was finally done.

Women were protesting against Kavanaugh on the streets too. They flooded Capitol Hill and told personal stories of abortion every day of the first week of September. Dozens were arrested, while hundreds more flooded the halls of the US Senate and the grounds of congressional buildings to express deep opposition to this man, whose misogyny is so deep-rooted as to be almost unbelievable.

One woman was quoted as saying: “I came to put my body on the line. Many citizens before me have fought for the equal rights of women. I can’t be silent when someone is nominated to the Supreme Court who would take our equal rights away.”

NARAL Pro-Choice America reported that their Missouri and Washington state chapters’ executive directors, Alison Dreith and Tiffany Hankins, were among the more than 30 protesters who were arrested for demonstrating inside the Senate hearing room itself.

In some quieter, good news, a bill has been passed to mandate California’s state universities to provide medical abortion at campus health centres. The bill was awaiting final wording and approval by the Governor in early September. College students seek abortion at a higher rate than other age groups in California. For nearly 20 years, students have safely and effectively used the abortion pill. But they’ve been forced to do so off campus, which for some involves significant and unnecessary obstacles.