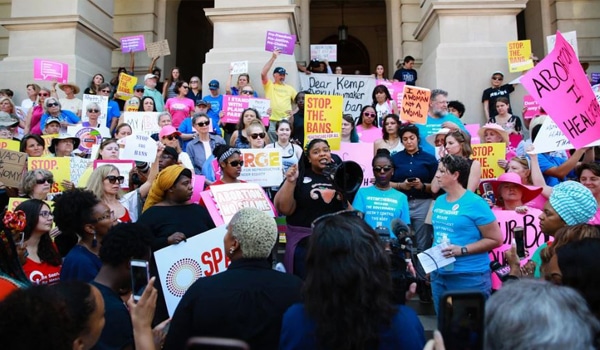 The Supreme Court [may not be able] to protectabortion access anymore, but thousands of activists will.

Americais a country that telegraphs profoundly conflicting ideas of how women shouldlive their lives. There are five female candidates for president. Women arefully integrated into the paid labour force: Almost half of workersare women. Seventy percent of mothers with children work outside the home; thevast majority working full-time. Across income groups, but especially amonglow-income families, the wages women earn increasingly represent half—or more—of what their families live on. America depends on women’slabor, paid and unpaid, and expectswomen to dream big, just as men do.

Andyet in 2019 alone, state after state has passed laws that, if enforced, wouldcompletely undermine the United States’ notion of itself as a country thatembraces gender equality… So far, all these laws have been blocked by federaljudges, but they will work their way up to the Supreme Court, where an anti-choicemajority now holds sway… Conservatives continue to fight tirelessly to shamethose who seek abortions… and we’re getting close to the endgame.

Butthat’s not the whole story. As Joan Walsh writes in this issue, when she reported on the Virginia legislative races this fall, shediscovered that Democrats found ways to win while championing abortion rights…They won because they were unafraid – they didn’t avoid the issue – and becauseof local on-the-ground organizing that had their backs. That organizing isn’tonly in Virginia, and it isn’t only about elections. A mass, mobilized movementfor abortion access has taken root across the country, inspiring a newwillingness among Democrats in office to stand up for abortion rights. As Amy Littlefield notes in this issue, in 2018 more measures – 80 in total– were enacted to expand reproductive health access than to restrict it. Thatnumber has been steadily increasing since 2012. This year, more abortionprotections were passed than ever before. These include measures thatsubstantially expand access to abortion, as in Maine and Illinois, where it’snow covered by Medicaid, and in New York, which finally decriminalized abortionand expanded access to it throughout pregnancy. These measures are of crucialimportance not just for what they do but also for what they symbolize: Themovement demanding them is breaking through.

A New York Times article reinforcesthis sense of good news. They say the Democratic presidential candidates don’twant to simply defend abortion rights but have coalesced around an abortion rightsagenda more far-reaching than anything that past nominees have proposed,according to a survey they did of the campaigns. The positions reflect a hugelyconsequential shift. Every candidate they surveyed supported codifying Roe v.Wade in federal law, allowing Medicaid coverage of abortion by repealing theHyde Amendment, and removing funding restrictions for organisations thatprovide abortion referrals. Almost all of them say they would nominate onlyjudges who support abortion rights, an explicit pledge Democrats have longavoided.

On the other hand, a new Ohio bill would order doctors to re-implantan ectopic pregnancy or face “abortion murder” charges. Well, at least thesepeople have finally descended to beyond even the theatre of the absurd. [Andno, it isn’t clinically possible.]