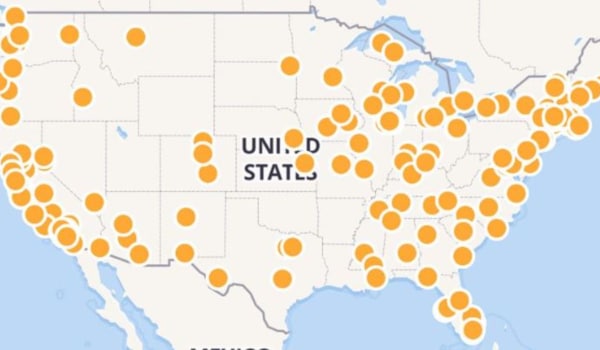 Thousands of people across the USA and in Puerto Rico marched as part of the #StopTheBans protest against the recent spate of anti-abortion bills being passed by Republican Party-dominated state legislatures in a number of states. This map by the ACLU shows where they took place:

This is just one of the photos on Buzzfeed News from the many events:

But the fightback is moving beyond the women’s and human rights movements and appearing among some unusual professionals. A website called Business Insider reported on 21 May that two state prosecutors/district attorneys have said they would refuse to enforce the anti-abortion laws just passed in the states of Georgia and Utah. This is so unusual that it is apparently unclear whether or not they actuallyhave discretion over enforcing, or not enforcing, state laws.

Several district attorneys in Georgia have come out vocally to denounce their state’s new “heartbeat” bill, HB 481, which will become enforceable in 2020. One said he “”has no intention of ever prosecuting a woman under this new law” and another said “this office will not be prosecuting any woman under the new law as long as I’m District Attorney”.

In Utah, the Salt Lake County District Attorney Sim Gill also said he won’t enforce Utah’s banon abortions after 18 weeks, which was passed earlier this year, and which is currently being challenged in court. His county is home to the only two abortion clinics in the state. “My job is to keep my personal beliefs out of it, but I absolutely believe that our citizens have constitutional rights and our institutions have an obligation to serve those citizens and not simply roll over and play dead,” hetold the Associated Press.

However, a professor of criminal law and procedure said states have the authority to take action if a district attorney does not enforce the law. For instance, appointing a special prosecutor or giving cases to a district attorney from another county. Still, this takes protest to a whole new level.

Then there is the rock star who is really angry at all these bad laws and he wrote a song and made a three-minute video that’s on YouTube, called The Alabama Abortion Ban is DANGEROUS! Enjoy it!

But the best story of the week is about a woman called Gretchen Whitmer. In 2013, she was the Democratic Party minority leader in the Michigan state Senate when she spoke against a Republican-backed effort to require separate health insurance to cover abortion. Seven minutes into her floor speech, visibly upset, she put down her notes and told her colleagues that she had been raped more than 20 years earlier and that the memory of the attack continued to haunt her. She thanked God that she had not become pregnant by her attacker.

In an interview several days ago, Whitmer said her decision to share her story was the right one. After her testimony, her office received thousands of e-mails from people thanking her. “That was the thing that bolstered me the most and convinced me that I had to continue speaking out and running for office and taking action,” she said. “There are a lot of victims and survivors out there who care, who need to be heard, who need to be represented and who need the law to reflect what we want and need to see in our country.” Earlier this week, Michigan’s Republican-led legislature passed two bills to restrict abortions and sent them to the governor. That governor is now Gretchen Whitmer. She said she will veto both of them.
SOURCE: Vancouver Sun, by Associated Press, 18 May 2019