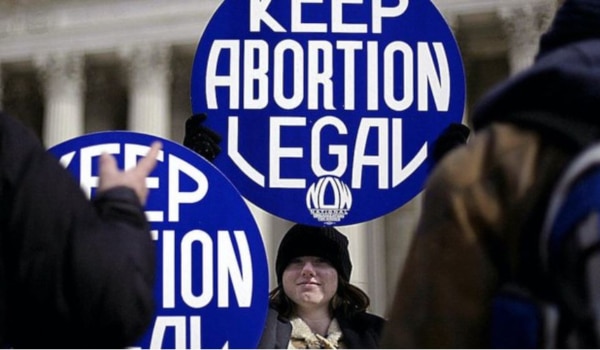 On Tuesday, 21st May at noon local time at statehouses, town squares, and courthouses across the USA – with other events throughout the week – advocates for the right to safe, legal abortion will show up to speak out and fight back against the unconstitutional attempts to revoke Roe v Wade and punish women.

Across the country, we are seeing a new wave of extreme bans on abortion, stripping away reproductive freedom and representing an all-out assault on abortion access. This is Trump’s anti-choice movement… and it’s terrifying, particularly for women of color and low-income women who are most affected by these bans. bans.

Politicians shouldn’t be making decisions best left to women, their families, and their doctors.

On the form that activists are asked to fill in to register an event, they are asked to endorse the following four principles:

As one of the partners in #StopTheBans, Catholics for Choice director Jon O’Brien wrote in an op-ed for The Hill:

“Moral decision making, such as whether to continue or terminate a pregnancy, must be guided by an individual’s conscience. As Catholics and as Americans, we support a woman’s right to follow her conscience and we denounce these immoral laws that deny her this most basic human right.

Catholics for Choice opposes these extremist bills and, in doing so, represents the voice of the majority of Catholics who disagree with punishments and stigma being forced upon women seeking abortion care. Six in ten U.S. Catholic voters believe abortion can be a moral choice. The one glimmer of hope is that abortion today remains legal in the United States and there is an army of good citizens ready to fight tooth and nail to defend it. The extremists have scored a victory in Alabama – but by going too far they might also blow themselves up.”

#StopTheBans is a partnership of the following US groups: