Home » News » USA – No, Roe v. Wade has NOT been voted down… it was a first draft by one judge

PHOTO: At the Supreme Court

The US magazine Politico caused near panic on 2 May 2022 when they announced that the Supreme Court had “voted to overthrow Roe v. Wade”. Although their next words were: “…draft opinion shows”, it seems no one saw or understood that bit. It was panic-stations everywhere, with the media also going crazy. The latter continues unabated a week later. Here are the facts:

The Supreme Court has a multi-stage process when it has decided to develop and hand down a judgment. The first step, following a public hearing where presentations can be made, initial discussions take place among all the judges. If there is not an immediate consensus, the group with a majority opinion writes a first draft of the ruling. The first draft in this case was leaked to Politico, who published it with their headline. In this instance, it was the five Trump-appointed judges, whom everyone knows are personally anti-abortion, who formed the majority. Their first draft was not voted on nor is it the whole Court’s opinion. It is now the turn of the minority to respond. In this process, some of the opinions and interpretations of the law may well not be correct, evidence-based, scientific, legally valid or constitutional. Chief Justice John Roberts will insist on all these aspects, especially the constitutionality of every word in the judgment, despite his personal views on abortion. Associate Justices Elena Kagan, Sonia Sotomayor and Stephen Breyer, who are strongly pro-choice and far more experienced at writing judgments than the Trump five, will also argue strongly and convincingly on this. So – let’s not clamour and flap about defeat before it happens! Instead, let’s give the news media a lot to publish in support of the right to safe abortion!

The Justices were upset about the leak, and they had a right to be. Their deliberations are meant to be in private after they have listened to submissions from the public. The risk of a judgment being politicised by leaks and the ensuing public outcry is serious, and this topic has been politicised more than most already. However, in this instance, I’m glad the first draft was leaked. Both because it has exposed the poverty of the anti-abortion views expressed in it and because it motivated an immediate response from the pro-choice majority across the country.

Among the arguments pressed strongly in the first draft, is the fact that abortion is not mentioned in the US Constitution of 1787. Here is the most apropos response possible to that, by New Yorker journalist Jill Lepore:

…“There is no mention of the [abortion] procedure in a four-thousand-word document crafted by fifty-five men in 1787. This seems to be a surprise to Samuel Alito…. There is nothing in that document about women at all. Most consequentially, there is nothing in that document—or in the circumstances under which it was written—that suggests its authors imagined women as part of the political community embraced by the phrase “We the People”. There were no women among the delegates to the Constitutional Convention. There were no women among the hundreds of people who participated in ratifying conventions in the states. There were no women judges. There were no women legislators. At the time, women could neither hold office nor run for office, and, except in New Jersey, and then only fleetingly, women could not vote. Legally, most women did not exist as persons.”

SOURCES: New Yorker, Of course the Constitution has nothing to say about abortion,
by Jill Lepore, 4 May 2022 ; Politico, 2 May 2022 + PHOTO by Drew Angerer/Getty Images 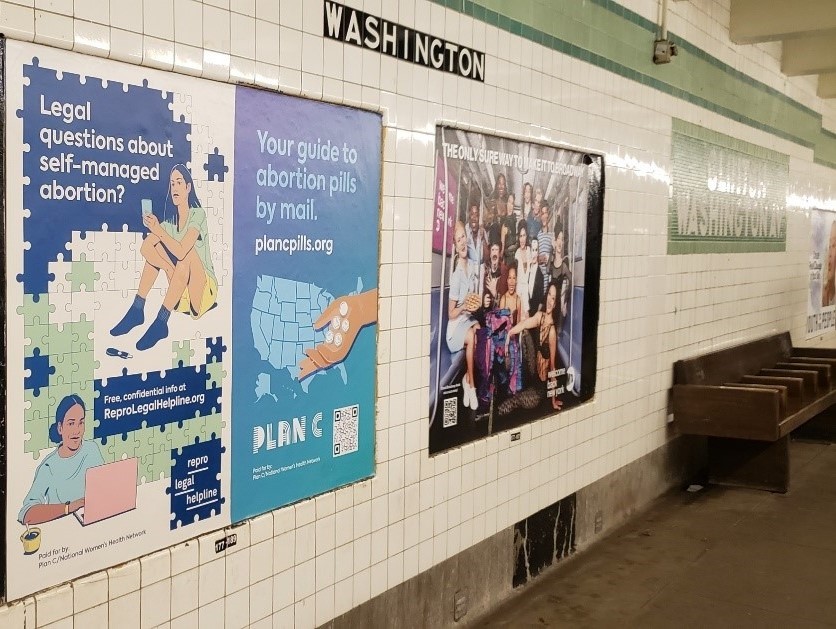 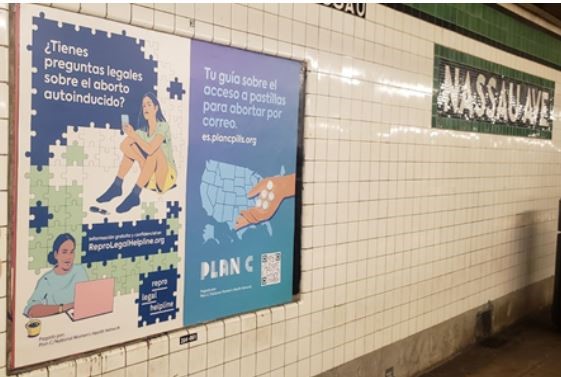 Many US abortion rights advocates believe the future of abortion involves access to abortion pills, but more information is needed by women themselves. Plan C has decided it’s time to go public with that information. In the New York subway, the opposite of capitulation is in the air. Advocates have teamed up to plaster New York City’s subways with information about how to find abortion pills and access free advice about using them. Across the city, including in Times Square, over 250 posters are now sharing abortion pill information in English and Spanish with the millions of people passing through subway stations and riding the trains each day.

“As politicians and courts continue their assault on abortion access, we are spreading the word that these medically safe and effective pills are available by mail in all 50 states,” said Elisa Wells, co-founder and co-director of Plan C, who organised the poster campaign. “Everyone deserves access to this modern medical technology, and we provide the information that people need to take control of their reproductive autonomy.”

The US Food & Drug Administration (FDA) approved that abortion pills can be prescribed online and mailed to patients’ homes. This would prevent a return to backstreet abortions. Some activist groups are recruiting volunteers and hiring staff for 24-hour hotlines that walk people through the process of taking the pills, in anticipation of an increase in demand. Some doctors’ associations are currently launching national campaigns to teach members how to prescribe the pills and urging them not to turn patients over to law enforcement. Organisations that help those on low incomes to pay for abortions are raising millions of dollars, in part to help purchase a stock of pills, which can cost over $500, an outrageously high price. The posters will also be shared on social media across the USA as another way to normalise awareness of the method. The goal is to spread the word about how the pills can be accessed in all 50 states and warn about potential legal risks in some states.

The posters will be on display until mid-May in dozens of subway stations across the City. This is a big milestone for Plan C, and a major opportunity to raise awareness in the country’s largest public transport system. Each poster is side by side with an advertisement for the free and confidential Repro Legal Helpline, run by the group If/When/How. 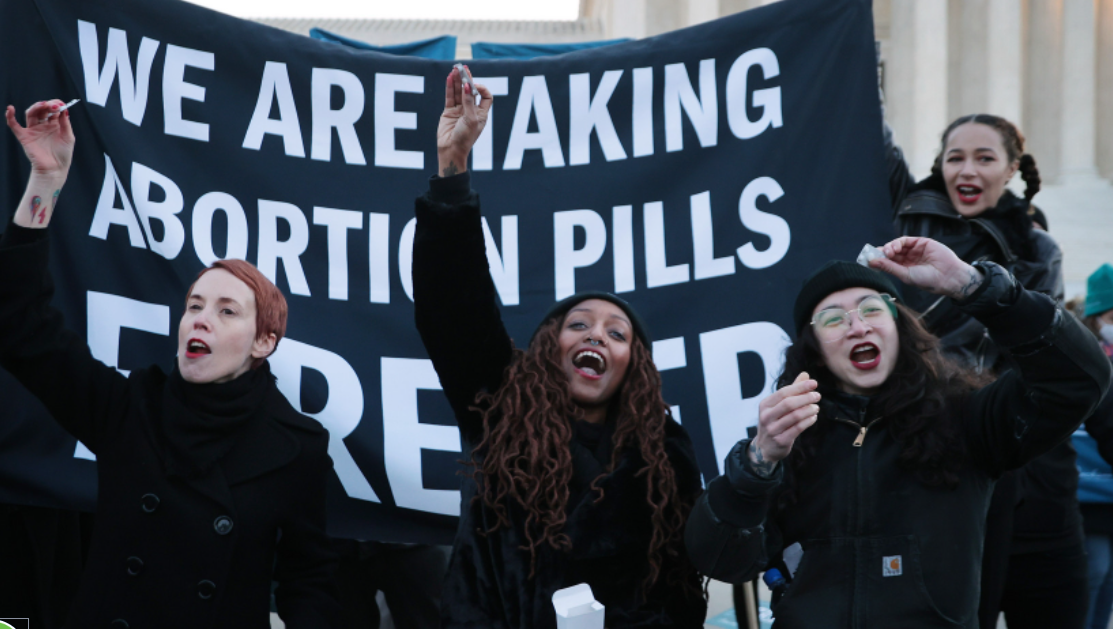 Dr Rebecca Gomperts, who runs the telemedicine abortion pill service Aid Access for US women, told CBS News that she has seen an “enormous increase” in Americans looking to obtain abortion pills to have in their homes in case they get pregnant, since the first draft of the Supreme Court opinion was leaked. “I think that’s a really good response,” she said. “I would say, buckle up, women in the US. Just get your abortion pills in your medicine cabinet, so you have it in case you need it.”

VISUAL: Three women prepare to take abortion pills while demonstrating in front of the US Supreme Court as the justices hear arguments about the Mississippi law that bans most abortions after 15 weeks, 1 December 2021. PHOTO by Chip Somodevilla/Getty Images