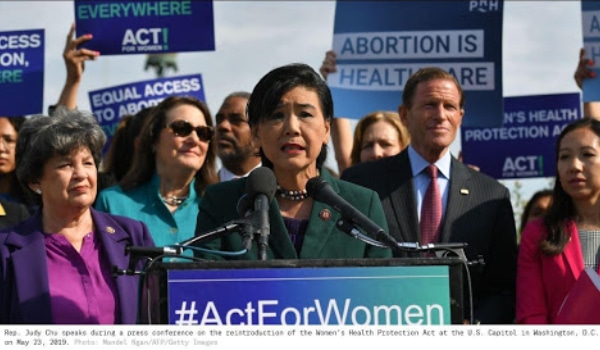 Standing outside the US Capitol Building on 22 May 2019, Congressional lawmakers announced the re-introduction of the Women’s Health Protection Act, which pushes back against the flood of abortion restrictions and the outright bans on access that have been moving at a record pace through state legislatures. The bill enshrines in federal law a woman’s right to receive abortion services and a provider’s right to [provide] abortion, said Rep. Judy Chu, a lead sponsor of the bill. It would put a stop to the state-based attacks that have been in the news constantly. It would block states from placing any medically unnecessary restrictions on abortion care – from medically inaccurate informed consent requirements to gestational limits. “It prohibits any non-medical restrictions on our bodies – that means no heartbeat bills, no requirements that clinic doors be a certain width, no waiting periods or unnecessary ultrasounds. It means no abortion bans,” Chu said. And it affirms “our rights to our bodies, our rights to make our own medical decisions, and our rights to choose what is best for us and our families.” The bill already has 169 sponsors in the House of Representatives, which has a solid pro-choice majority. The Senate is another discussion. But it makes women’s health care rights a major battle zone for the 2020 election.

According to a new report from the Guttmacher Institute, 378 abortion restrictions have been filed so far across the country in 2019. In fact, to date more than 1,200 abortion restrictions have been passed in the last eight years. What stands out in 2019 is that 40% of these restrictions would ban abortion altogether. Yet the right to abortion as expressed in the Supreme Court’s Roe v. Wade decision – and reaffirmed repeatedly over the last 40+ years – guarantees access up to the point of viability. So far a total of 17 such bans have been passed in 10 states, and regardless of the various points at which they constrict access to care, they share a common goal: send the laws up to the Supreme Court to strike down Roe.

Looking to 2010, according to a recent poll, 62% of Americans called health care the first or second most important issue. And in a 2018 poll, 71% affirmed support for Roe v. Wade, including 52% of Republicans.

Alarming escalation in anti-abortion trespassing, obstruction, and vandalism in 2018

Figures for 2018 released by the National Abortion Federation (NAF) on anti-abortion violence and disruption against abortion providers show a decrease in stalking, burglary, and assault and battery in 2018, but an alarming escalation in incidences of obstruction, vandalism, intimidation and trespassing. “Anti-choice individuals and groups have been emboldened by the rhetoric of Trump, Pence, and other elected officials, which is playing out in more instances of activities to intimidate abortion providers, disrupt patient services, and demonise abortion providers and their patients.

Trespassing reached the highest level since the NAF began recording such incidents in 1999, while incidents of obstruction of facilities grew 78% from 2017 to 2018. Providers also reported record levels of picketing (99,409 incidents) since recording began in 1977, and the highest number of incidents of vandalism (125) since 1990.

Alabama’s invidious law would punish doctors who provide abortions with up to 99 years in prison with no exceptions. It was not due to take effect until November 2019, but now it will go to court instead, where it should certainly be declared unconstitutional.
SOURCE: CNN.com, by Veronica Stracqualursi, 24 May 2019