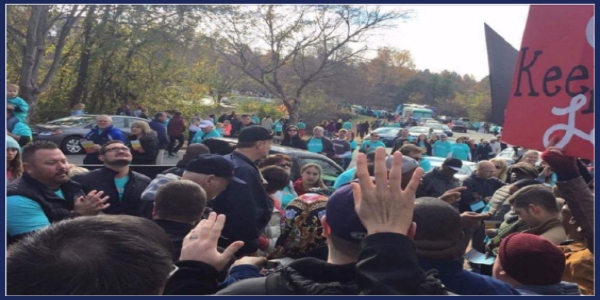 A clinic in Charlotte, North Carolina (not to be confused with Charlottesville, Virginia), is at the centre of a vicious battle between reproductive rights advocates and anti-abortion groups that launch regular massive clinic protests. Since last summer, the clinic has been the target of hundreds and at times thousands of protesters.

The protesters bring with them large RVs (vans) advertising ultrasounds (which are required for abortions in North Carolina and are done in the clinic) and noise amplifiers that they use to preach to clinic staff, patients, clinic escorts and defenders.

They have also begun using deafeningly loud sound to blare out anti-abortion messages. The police department has been slow to respond to the noise, which exceeds levels stipulated by local ordinances. In the past year, clinic staff have filed for thousands of permits to block the level of noise, but the clinic has only been granted permits on fewer than ten occasions.

There is also a wi-fi node hidden somewhere nearby for an open network named “Abortion Info”. Patients seeking internet access while inside the clinic often click on that network, thinking it belongs to the clinic. They are taken to a log-in page whose design resembles the clinic’s. To access the internet, however, they must go through a series of anti-abortion propaganda videos. Some reported that they later received calls, emails and social media messages asking them if they need “guidance for abortion care”.

In March, the clinic’s network firewalls fell to “delay-of-service” attacks, that is, where communications are slowed, often by flooding a system with thousands of false requests. The source is as yet unidentified. And there’s more if you can stand it, read on…