Protesters gathered in New York, Washington DC, Los Angeles, Austin Texas and Chicago, as well as at hundreds of smaller events across the country. All in all, more than 380 events were scheduled from Maine to Hawaii, the organisers said. In the middle of the above photo, a placard says: Vote the elephant out of our wombs! (The elephant is the Republican Party!)

And look, the green wave has reached North America! 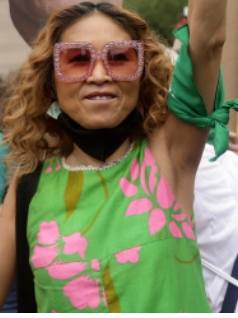