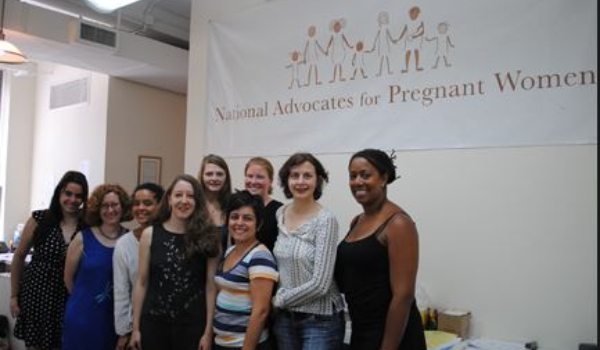 On September 13, 2018, prosecutors in Chesterfield County, Virginia, finally dropped the criminal charge of “producing an abortion,” a class 4 felony, filed against Michelle Roberts. Almost three years ago, Ms Roberts had experienced a stillbirth at home and placed the fetal remains in the ground behind her house. In February 2016, police received information suggesting they look in the backyard. They retrieved the remains and prosecutors, relying on a wholly inadequate forensic medical examination, came up with the far-fetched theory that Ms Roberts had not experienced a stillbirth but instead had intentionally aborted a late-term fetus.

National Advocates for Pregnant Women (NAPW) and our allies recognized that Virginia’s felony abortion statute, still on the books, was never intended to be used as a basis for arresting a woman who experienced a pregnancy loss or had an abortion. And regardless of the statute’s original intent, a law permitting criminal penalties against the woman herself would be unconstitutional. Her defense attorney sought to have the charges dismissed on these grounds, but was rebuffed by the trial court judge. Following the denial of the motion to dismiss, NAPW joined the case as co-counsel. We identified and worked with medical experts, including a forensic anthropologist, medical examiner, and a professor of obstetrics & gynecology and psychiatry. Three experts examined the evidence the prosecutor was relying on and concluded in sworn written statements that there was no medical or scientific support for the prosecution’s claims. Based on the strength of this scientific evidence, the prosecutor decided not to pursue the charge and our client’s legal ordeal finally reached an end.

This case is one of several recent prosecutions that contradicts anti-abortion activists’ claims that abortion in the US can be a crime without the women who have abortions being criminally investigated and prosecuted. This case also demonstrates that laws criminalizing abortion are not limited to the issue of abortion. Such laws sweep women who wish to remain pregnant but experience miscarriage or stillbirth into the criminal law system. In addition, this case demonstrates the importance of zealous criminal defense and the extent to which, through the combination of pregnancy and junk science, women are at risk of wrongful prosecutions and convictions.

On September 20, 2018, feticide and involuntary manslaughter charges were dismissed against Kelli Driskel. In December 2017, Ms Driskel went to the emergency room after experiencing a stillbirth at home. An autopsy was later performed on the fetal remains and the cause of death was determined to be placental abruption with “acute methamphetamine intoxication” as a contributing factor. Ms Driskel was interviewed by the police while still hospitalized, acknowledged past substance use, and subsequently was charged with feticide, involuntary manslaughter, and possession of methamphetamines.

NAPW reached out to Ms Driskel’s legal counsel. NAPW drafted a motion to dismiss her case. Following the Bei Bei Shuai and Purvi Patel cases (two cases NAPW helped to win), Indiana had clarified its laws to explicitly exclude pregnant women from prosecutions under the state’s feticide and manslaughter laws. Unfortunately, this change in the law came too late for Ms Driskel, who had been charged while the old law was in effect, and our motion to dismiss was initially denied.

We persisted. Local counsel filed a second motion to reduce Ms Driskel’s bond (she had been incarcerated since her arrest). That motion was granted and counsel urged the court to reconsider the motion to dismiss. Meanwhile NAPW drafted an Open Letter to the Madison County prosecutor, asking him to drop the prosecution. Thirty-eight organizations and experts joined the letter that NAPW delivered in August. On September 20, 2018, the court granted the motion and dismissed the charges of feticide and involuntary manslaughter.