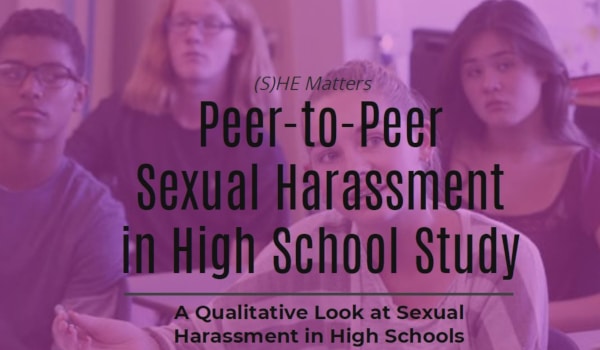 (S)HE Matters stands for Sexual Harassment Education Matters, the S is in parentheses to represent She/He/Them because this isn’t just a woman’s issue. Our mission is to decrease sexual harassment in high schools and to change policies as well as implement sexual violence education in schools. We recognize everyone’s voice as valid and strive for more student voice to be included in education decision-making processes.

The Prichard Committee Student Voice Team (SVT) is an initiative of the Prichard Committee for Academic Excellence, an independent non-profit that mobilizes citizens to improve Kentucky schools. They worked with (S)HE Matters to carry out a qualitative study of student perceptions of sexual harassment in high school in the last months of 2018.

They made it a visual report so that it would be accessible to everyone. The data were collected through snowball sampling. There were over 1,030 respondents from 42 US states and two US territories; 834 respondents were from Kentucky. The survey window was about one month. It contained questions about the types of harassment experienced, reactions to harassment, how harassment was reported, the effects of harassment on mental health, and resources available in schools to deal with harassment.

Of the respondents who had experienced sexual harassment:

66% said they just ignored the incident

44% changed the way they dressed to avoid unwanted attention

9% reported any incidents to their school

4% who were from ethnic minorities reported incidents to their school.

67% did not know of any policy in their schools against sexual harassment.