The Abortion Support Network (ASN) is a charity that provides information, financial assistance and, where needed and when possible, accommodation in volunteer homes to those forced to travel for abortion care from Ireland, Northern Ireland, the Isle of Man, Malta, Gibraltar and Poland.

In February, ASN’s helpline heard from 70 people seeking our services, 22 more than in January, mostly from Poland and mostly in later stages of pregnancy. Many were impacted by the publication of the October ruling making abortion in case of foetal abnormality illegal. These 70 people were in addition to the hundreds of calls and emails fielded by our Abortion Without Borders helpline in Poland, and our partners Abortion Dream Team, Ciocia Basia, Abortion Network Amsterdam and Women Help Women. Of the 70 people who contacted ASN, 43 were from Poland, 21 were from Ireland, and 4 were from Malta.  Following are some of their experiences:

“I am 15 weeks pregnant. During a visit to the gynaecologist I was told the fetus most probably has Trisomy 18 or 13. Until recently I thought I would undergo a termination procedure in Poland. Now I’m lost in all this. I don’t know what will happen to me next. I feel helpless in the situation that the “government” has created for us.” Client and her partner did not need funding other than us booking their accommodation, and we were also able to provide all the letters they needed to cross borders and stay in hotels, as well as accurate information about what testing was necessary.

A woman in Ireland who was given the first set of tablets for an early medical abortion. When she returned to get the second set of medication, she was told she was more than 12 weeks and that they would not continue the procedure. They also very helpfully told her that the tablets she’d already taken might harm the foetus and offered to direct her to a social worker or ante-natal care. When she asked about support to travel to England, they said they didn’t know anything about that. Thankfully, she found our number.

A woman from Poland who paid a “doctor” 2000zł/£390 who provided medication he claimed was Mifepristone and Misoprostol over five weeks. When these tablets did not work, he wanted to charge between £3,000 and £6,000 for an illegal surgical abortion.

We heard from a mother of two children who also had several children die a few months after birth due to the same genetic condition that current pregnancy is diagnosed with. She speaks no English and is afraid to travel by herself but the only person who knows about the pregnancy is her partner who will have to stay behind to watch the children. She lost her job due to Covid and has very little money.

From a woman in Ireland, giving lie to the myth of “abortion on demand” – “I’ve called all three clinics in the UK and none of them can see me for a week or more. I naively didn’t realised there would be a wait in the UK. I thought you just rang, made an appointment and that’s it. I’m really desperate to get an appointment for next week.” We were able to help her come over, although not as quickly as she had hoped. Delays in appointments are caused by a combination of it being a busy time of year and delays due to Covid absences.

“I am devastated. Today I ended up in hospital because of a violent partner and it turned out that the foetus is fine and I cannot carry this pregnancy. I am in a violent relationship and cannot deliver this foetus. All pharmacological attempts have failed and in order to free myself from this man I am forced to terminate this pregnancy. I am desperate. This man has made me completely dependent on him. I have no money of my own, for anything, not even for food or to pay for a procedure, to travel… I simply have nothing. .Please help, I have no choice, I don’t know what to do anymore”

A woman from Ireland too far along to obtain care in country. We provided information on how to book an appointment, but between the client obtaining an appointment and travelling, someone in her family came down with Covid, meaning she cannot travel until they all complete isolation.

A young woman from France, living in a refuge with her children after escaping an abusive relationship. A group in France has covered the €1,650 cost of the abortion abroad, as she is over France’s 12 week limit for abortion, and ASN agreed to cover the cost of her travel and accommodation.

A Polish woman living in the UK who is not eligible for free abortion care. We were able to ensure that she could access a safe, legal abortion.

Gibraltar’s postponed (from 19 March 2020) referendum on abortion is expected to take place no later than June of this year. Polls taken last March indicated the referendum would pass with an over 70% majority. Fingers and toes crossed that Gibraltar joins Ireland and the Isle of Man in liberalising abortion laws and providing abortion services more in line with the rest of Europe. 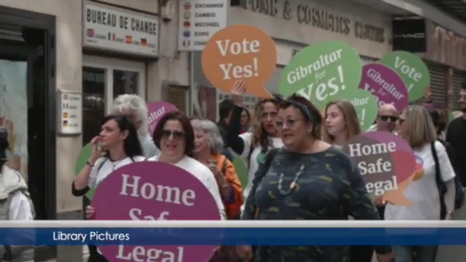 For more information on what’s going on in Gibraltar, see any or all of the following:

Gibraltar for Yes
Doctors for Choice Gibraltar
In Her Shoes Gibraltar

Abortion Support Network provides advice on travelling for abortion, financial assistance towards the costs, and, where needed and where possible, accommodation in volunteer homes. We do this for people resident in Ireland, Northern Ireland, the Isle of Man, Malta, Gibraltar and Poland.

Funding is available on a case by case basis depending on financial need and ASN’s available funds. Please contact us before booking travel as we can also advise on the least expensive clinics and methods of travel. We can also provide information about reputable providers of early medical abortion pills by post. If you are considering ordering abortion pills online, please read this first.