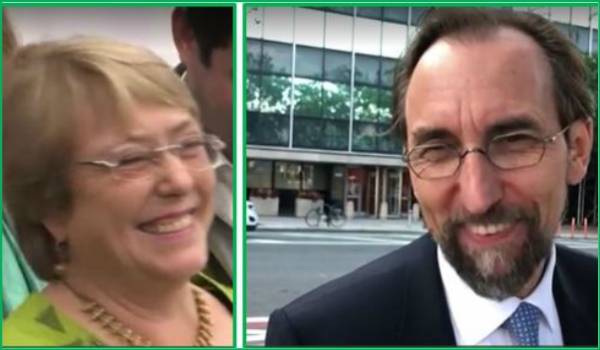 The High Commissioner Zeid Ra’ad Al Hussein warmly welcomed the UN General Assembly’s approval of the UN Secretary-General’s appointment of Michelle Bachelet on 10 August to succeed him when his mandate comes to an end on 31 August 2018. Zeid said in a statement he was delighted with the appointment of Bachelet. “She has all the attributes – courage, perseverance, passion, and a deep commitment to human rights – to make her a successful high commissioner.”

She most recently served as President of Chile (from 2014 to 2018, and 2006 to 2010). One of her last achievements in 2017 was to see the new abortion law passed before she left office. In between her two terms as president, she was the first Executive Director of UN Women from 2010 to 2013. She previously also served as Minister of Defence and Minister of Health in Chile.

Commissioner Zeid has been a strong human rights advocate. Succeeding him, Michelle Bachelet will face a world of rising hate and inequality as the UN human rights chief, said UN Secretary-General Antonio Guterres. Speaking to reporters, Guterres praised Bachelet as perfectly suited for the job but warned she takes office “at a time of grave consequence for human rights” in the world. “Hatred and inequality are on the rise,” he said. “Respect for human rights law is on the decline, civil society is being squeezed out and press freedom is under pressure.”

In a video posted on Twitter, Bachelet said in Spanish that she was “deeply humbled and honoured” by the appointment and pledged to bring all of her “energy and convictions” to the job.