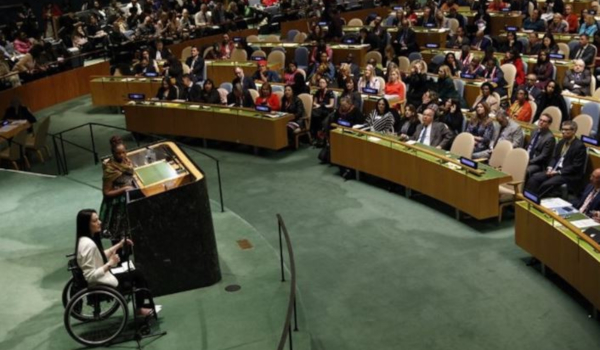 Sexuality Policy Watch wrote: “Since the mid-2000s, asanti-feminist forces began attending its sessions in increasingly larger numbers, the UN Commission on the Status of Women became a battlefield. Tensions and deadlocks intensified in recent years as de-democratizing trends mushroomed worldwide. The aim ofthe 63rd Session was to reach consensus in regard to “Social protection systems, access to public services and sustainable infrastructure for gender equality and the empowerment of women and girls”, a goal not easily attainable when universal social protection policies are threatened by ultra-neoliberal policies and“gender” isheavily under attack in a large number of countries. CSW 2019 was also a privileged stage to observe how recently elected right-wing Latin American governments may have shifted their historical position on gender and sexual and reproductive health and rights. This was indeed glaring in the case of Brazil, as illustrated by the speeches of the Minister of Women, Family and Human Rights and parallel events in which public functionaries have participated… Against this troubled backdrop,CSW 2019 delivered a robust outcome document reaffirming long-standing commitments on gender, equality, sexual and reproductive rights and health and universal social policies. As noted in the statement issued by the Women’s Rights Caucus:

“Feminist persistence at the UN Commission on the Status of Women (CSW) has delivered new international standards on women’s human rights to social protection systems, access to public services, and sustainable infrastructure. These gains were achieved in spite of the increasingly polarized political environment at the UN’s biggest annual gathering on women’s rights”.

In a press release, Shannon Kowalski, International Women’s Health Coalition Director of Advocacy and Policy, also commended the strength of the outcome document, “despite unprecedented attacks led by the United States and ideological allies like Russia,Saudi Arabia, andBahrain….” But, she added: “Member States failed once again to commit to address discrimination on the grounds of sexual orientation, gender identity, and expression, and fell short of making commitments that would fully meet the needs of migrants and survivors of gender-based violence. Though governments reaffirmed that women’s human rights are universal, indivisible, and interrelated, too many still want to pick and choose which rights, and whose rights, to uphold…”

The agreed conclusions of the meeting are entitled “Social protection systems, access to public services and sustainable infrastructure for gender equality and the empowerment of women and girls”. The importance of sexual and reproductive health and reproductive rights are mentioned at least half a dozen times in the document, as are specific aspects of SRHR, but not abortion, not even unsafe abortion.
SOURCES: Sexuality Policy Watch, Sexual politics in March 2019, 8 April 2019 ; IWHC Press Statement, 23 March 2019; PHOTO: Devdiscourse, 12 March 2019