Home » News » UK – Who decides? We trust women. Abortion in the developing world and the UK 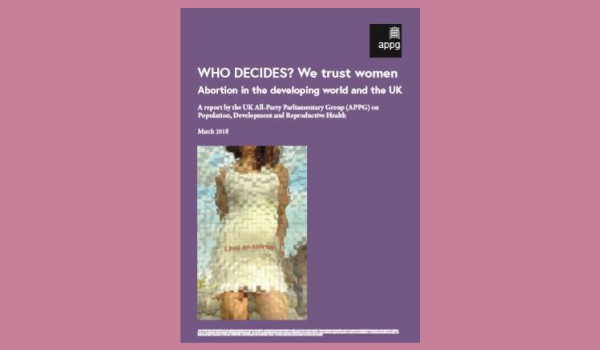 This report was released on the evening of 7 March for International Women’s Day at a reception at the House of Lords in London, hosted by Baroness Jenny Tonge, Chairwoman of the UK Parliament’s All-Party Parliamentary Group on Population, Development and Reproductive Health. The report was based on a series of papers presented to the APPG by a long list of experts during the week of 20 November 2017. In the Foreword, Baroness Tonge said: “I hope our country will follow where Canada has led and bring our laws up to date, and encourage other countries worldwide to do likewise. Women deserve to make their own decisions and be in control. We trust women.”

The report covers abortion law reform, abortion service delivery and methods, the abortion workforce, women who are difficult to reach, obstacles to safe abortion care – ranging from lack of access to lack of information – the obstacles created by anti-abortion tactics, and the future of abortion (including moving towards self-use of medical abortion pills and maintaining quality of care). The report also makes a long list of recommendations about the UK and to the UK Department for International Development, in terms of what they can do internationally to increase their support for change in other countries.