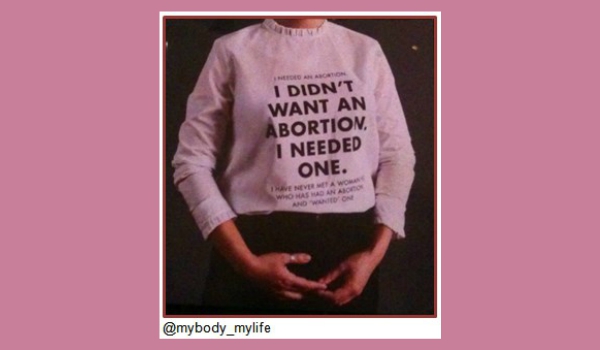 Teenage pregnancy: The choice that changed my life

‘I can’t be pregnant,’ I said to the doctor who had just examined me.

‘But you are sexually active,’ he pointed out.

‘I wouldn’t say “active”.’ I explained. ‘I’m not sexing around all the time. Just, you know, when my parents are out or…what I mean is, I have a serious boyfriend and we only have sex sometimes. Well, actually it is more like making love.’

I met my boyfriend when I was 14… We believed that nothing bad could happen as long as we were together. But at 16, pregnant was about as bad as it got.

We left the doctor’s surgery that day in shock. Neither of us knew what to say so we didn’t speak. We just sat on a bench smoking cigarettes in the rain, our young minds desperately trying to process the news. I couldn’t understand how it could have happened. Girls like me didn’t get pregnant. I had only ever slept with one boy. I wasn’t stupid. I knew about contraception and I thought I’d been careful. I had plans – I was going to finish college, move to London and be an actor. Having a baby was not part of my plan.

‘Well, I’m not having a baby,’ I finally said feigning nonchalance and bravado. ‘I can’t keep it. We can’t.’ ‘Are you sure?’ he asked weakly, struggling to work out how he was supposed to react. ‘I think so,’ I replied, and we did the ultimate walk of shame home to tell my parents the big news. I spent the next few weeks leading up to the operation in denial about the fetus growing inside my body.

…We barely spoke about the impending operation. We barely spoke at all. We just did what we needed to do to survive until it was over, and then we would be ok again. Wouldn’t we? I thought an abortion would be the easiest option. It was only later, when I lay on the hospital bed waiting to have my pregnancy terminated, that I realised there was no easy option. As I sat on the ward waiting my turn, doubts flooded my mind. I had been so sure it would be easy but when the nurse called my name I burst into tears. For the first time it dawned on me what was actually happening, and I suddenly had an overwhelming feeling of panic. In that moment I wanted to stop it but I didn’t know how. I felt like it was too late. I had made my choice.

I regret having an abortion, but that doesn’t mean I’m against it

by Rachel, in her twenties, from the south-east

I had two abortions as a teenager. They were both early on, both with the same abusive boyfriend. One happened in horrible circumstances which I will not repeat here. I consider them to be the most devastating events to have happened in my life.

Sometimes, I can’t sleep thinking about them. My biggest, most all-consuming fear is that I’ll be unable to conceive because of them. I’m too scared to tell my wonderful, loving boyfriend in case the image he has of me changes with the knowledge of what I did.

I’ve always worked hard because I wanted more than the lot my mum, herself a single parent who had children with an abusive man, was given. The thought of repeating that cycle, of being so angry, for she was so very angry as we grew up, and alone – and I really would have been alone, my partner at the time made that crystal clear – just made me feel so empty. Like life was done – that was it. I’d reached its peak, and it hadn’t been great up until that point.
I made the decision, in part thanks to some serious pressure from him, and cried so much throughout the day I had people approaching me in the hospital corridors to ask if I was OK. I probably looked like I was having a total breakdown and I suppose in some ways I was. That was the worst day of my life. But I know access to abortion needs to exist for various reasons. If anything, my experience has only strengthened that belief, because I desperately needed it to exist at that time…