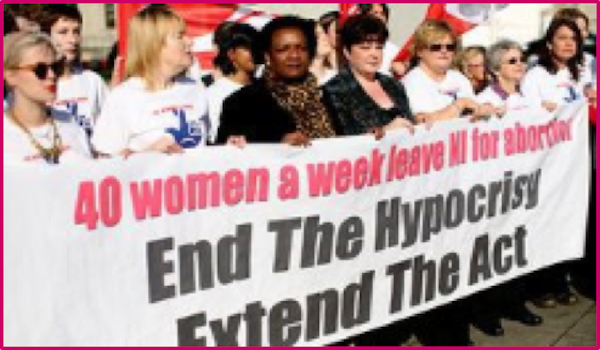 The UK Supreme Court has ruled on a case of a girl from Northern Ireland who became pregnant in 2012, aged 15. She went to England with her mother for an abortion in a private clinic, which cost about UK £900. She could not have the abortion in Northern Ireland because the law is far more restrictive than in the rest of the UK. They were only able to afford the cost because of financial support from the Abortion Support Network, a charity which raises funds for women in this situation. Terminations are only permitted if the woman’s life is at risk, or there is a permanent or serious risk to her mental or physical health. In practice, very few abortions take place in Northern Ireland.

The now young woman and her mother took a case against the UK Health Secretary Jeremy Hunt, who is busy single-handedly starving the UK’s National Health Service (NHS) of funds altogether and who is personally opposed to abortion. He has apparently conceded that he has the power to make provisions for Northern Ireland residents to access free NHS abortions in England, but he has not been minded to do so The mother and daughter claimed in their appeal that it was unlawful that he had not done so.

However, the Supreme Court judges dismissed the appeal by a majority of three to two. Delivering the ruling, Lord Wilson said it was not for the court to “address the ethical considerations which underlie the difference” in the law regarding abortion in Northern Ireland and England. No, but the UK parliament could.

Lord Wilson also said the five judges had been “sharply divided” on the case, and that two of the five would have upheld the appeal. The case was first heard in a lower court in 2014. He expressed “sympathy” for women facing unwanted pregnancies in Northern Ireland and said the law put many in a “deeply unenviable position”. He said they faced “embarrassment, difficulty, and uncertainty” in their “urgent need to raise the necessary funds” to travel to Great Britain for private abortions.

Lord Kerr and Lady Hale, the two most senior members of the court, found that the current policy unjustifiably breaches women’s rights under article 14 (freedom from discrimination) and article 8 (right to private and family life) of the European convention on human rights. But the majority view was that the Health Secretary was entitled to restrict access to NHS abortions in line with powers over abortion that had been devolved some years ago to the Northern Ireland Assembly. The judgement therefore was that Mr Hunt was “entitled to afford respect to the democratic [sic] decision of the people of Northern Ireland not to fund abortion services”.

Encouraged by the views of Lord Kerr and Lady Hale, which were legal opinions rather than sympathetic noises, the two women have said: “We have instructed our legal team to file an application with the European Court of Human Rights in Strasbourg, to protect the human rights of the many other women who make the lonely journey to England every week because they are denied access to basic healthcare services in their own country.”