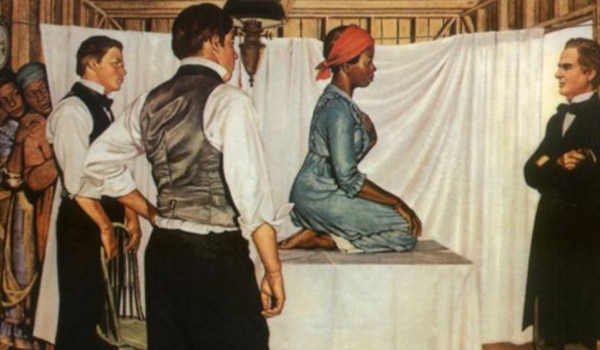 Anarcha Westcott was a teenager who had just given birth for the first time when she was forcibly separated from her baby and subjected to experimental gynaecological surgery without any anaesthetic. Dr James Marion Sims was the doctor who led the team that put Westcott and other unconsenting, enslaved Black women through trauma in order to develop the speculum and a range of gynaecological techniques such as surgery for fistula. Today, he is known as the ‘father of modern gynaecology’. His cruel treatment of the women he experimented on, described as torture in both New York and London, had largely been forgotten until the past few years when it was raised as an outcome of Black Lives Matter.

Now a campaign has been launched to commemorate Sims’ victims, who between 1845 and 1849 endured some 30 procedures as Sims perfected his method of fistula surgeries.In his autobiography, Sims himself describes in vivid detail how he treated Black women as medical guinea pigs. Having perfected his techniques on Black women, he later established the first women’s hospital in New York City in 1855, where he performed the procedures on white women – only in this case with their consent and the use of anaesthesia.

Heidi Downes, a midwife in London, has launched a petition asking the Royal College of Obstetricians and Gynaecologists for a monument to be dedicated to the memory of the women he experimented on and placed at the College.

She started the campaign a year ago. One of her colleagues had attended a conference where Dr Amali Loukgamage, a consultant obstetrician-gynaecologist who is also involvedin medical education at the Whittington Hospital in London, and an Honorary Associate Professor at University College London, talked about obstetrics and gynaecology. In the talk, she mentioned Anarcha Westcott and two of the other women who were subjected to the surgeries, named Lucy and Betsey. The colleague told Heidi Downes about it, and the campaign was the result.

In an article in the British Journal of Midwifery, Downes wrote: “The Nursing and Midwifery Council code asks that those receiving care from us are treated with respect, that their rights are upheld and that any discriminatory attitudes and behaviours towards those receiving care are challenged.” Hence, Downes asks: “How was this crucial part of obstetrics history not part of the national curriculum and how was it not passed onto myself and my fellow colleagues and students? Anarcha and the other women who were treated in this barbaric way deserve to be put on the same pedestal that Sims, rightly or wrongly, has been placed upon.”

When asked for their response, the RCOG told the HuffPost UK that they have “plans to develop a new exhibition to recognise women’s involvement in the history of obstetrics and gynaecology. This will include many courageous women who contributed willingly, and sadly also women such as Anarcha who were not in a position to give consent to medical research.” These plans are, however, delayed because of the pandemic…

PLEASE SIGN THE PETITION to the RCOG, which has already collected more than 8,500 signatures at this writing.