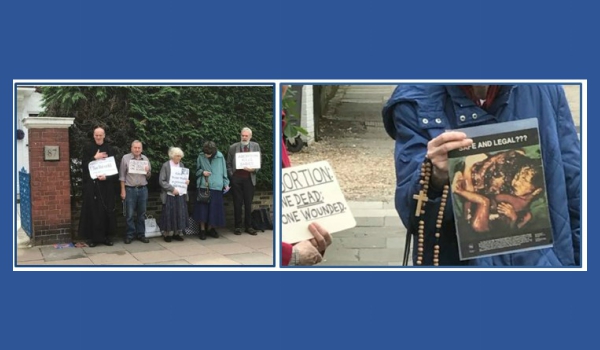 The Voice for Choice coalition in the UK have long been aware of persistent protests by anti-abortion activists outside abortion clinics across the UK. In West London, outside a Marie Stopes clinic in the borough of Ealing, women going into the clinic have been followed, called ‘murderers’, and told to ‘change their lifestyles so they won’t end up back [at the clinic]’. There have also been reports of women being filmed, the display of large, graphic, and distressing posters showing mangled fetuses, and the distribution of false medical information, for example that abortion causes breast cancer, which has been proven to be absolutely untrue.

These protests are not designed to change the law or influence the opinions of elected officials, but to target individual women seeking lawful healthcare. Access to justice for women targeted by these protesters under existing harassment law would require women to breach their own medical confidentiality in order to report their experiences to both the police and court.

At the suggestion of Labour MP Rupa Huq from Ealing in West London, Ealing’s Council decided to find out whether they could make use of existing anti-social behaviour powers to combat these protests and protect access to essential healthcare in their borough. Voice for Choice and a cross-party groups of members of Parliament and others are recommending consideration of similar moves by other councils in local areas with clinics where this harassment is a problem.

A number of members of Parliament are also seeking a way to introduce ‘buffer zones’ at a national level, whereby protesters would not be allowed to harass, intimidate, or approach women accessing services.

Rupa Huq told the BBC that an anti-abortion group had targeted her and “unfolded huge graphic images of dismembered fetuses” outside her office in the past.

One of their spokesmen said: “We can assure Ealing council and Ms Huq that if they are successful in their campaign and remove the current pro-life groups from Mattock Lane, they will be getting us on their high streets in a very, very big way. “We will do this to show her voters what Rupa Huq is fighting for.”

Policing Minister Nick Hurd, responding to MPs concerns, was quoting as saying: “The fact that they are producing leaflets, that they are pushing forward their views to women who are entering these clinics at a moment of extreme emotional vulnerability, constitutes harassment, whether it is intentional harassment or not.”

A spokesperson for women’s rights group, Sisters Supporter, which presented Ealing Council with a petition with more than 3,000 local signatures calling for the buffer zone, told The Independent she had seen women being harassed and reduced to tears after  being confronted by these demonstrators. Speaking before the Council meeting, which voted almost unanimously to support a public disorder ruling, she said: “They call the women murderers, they physically trying to stop them from going into the clinic, giving them leaflets that say they’re going to become a drug addict and have an eating disorder. We’ve seen them tell girls it’s not the clinic, so women [leave and] miss their appointments. On a number of occasions we’ve also seen girls get so upset that they’ve burst into tears and run into the nearby park. On one occasion, the woman just didn’t go in. She got too upset and didn’t want to walk past them. Her partner asked them to move out of the way so she could walk in but they wouldn’t.”

But the anti-abortion group denied that this constitutes harassment.

Bpas, who are leading on the buffer zone campaign, as their clinics and offices are also harassed, point out the following:

> This is not about individuals’ opinions on abortion but about protecting unimpeded access to healthcare;

> Residents have a right to access lawful healthcare without prejudice, harassment, or intimidation;

> The law should protect women from harassment in the street;

> Debate is an essential part of a democratic society, but women accessing pregnancy advice and abortion services are not seeking debate.