Home » News » UGANDA – It’s so hard. We just pray that one day they hear us 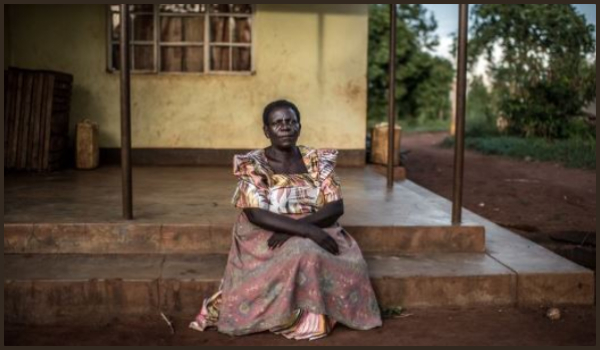 Margaret‘s daughter, Gladys, was raped by a relative as a teenager and became pregnant. She did not tell her mother what had happened. Not wanting to have a child at such a young age conceived through incest, Gladys tried to terminate the pregnancy herself using local herbs but got an infection and died. “My name is Margaret and I am a widow. I lost my daughter in 2011. She was called Gladys and she was 16. I didn’t know that she was pregnant. She tried to use local herbs to abort. I only found out about it three days later when she was bleeding very heavily. I tried to take her to the hospital but unfortunately she died on the way.”

My name is Anne, I am 14 years old, I am a student at one of the local schools near my (rural) village. I recently went to the health centre for post-abortion care. I was referred there by VODA (Volunteers for Development Association Uganda) and I was helped by the mid-wife, her name was Grace. The VODA community volunteers, they found me at my grandmother’s house. They brought me to the health centre.

I was on my way to visit my grandmother. A man raped me. After he finished with me he told me to go back home and never to tell anyone about it. I went back home to my parents… There is no VODA there. I realised I was pregnant because I found out I had missed my periods. Then I told my mother. So then I had to go back to my grandmother’s house. She said we were going to the hospital but it wasn’t like the one where Grace works, where I finally got my post-abortion treatment. She took me to a place where a woman gave me some herbs. Then we went home and the thing came out. I was bleeding. Then the VODA counsellor came to my home and suggested to my grandmother that I should be taken for treatment.

I had learnt about how girls can get pregnant but I didn’t know anything about safe abortion. In Luwero, where I come from, many girls I hear they use herbs to abort but I had not tried it because I had not had any sex until that man forced me. I am telling my friends about safe abortion and contraceptive services but I also need to be given more information about it because I was not taught about most of what Grace the midwife was telling me. I know that women can take precautions for family planning like pills but my mum told me it’s only for married people. I am very thankful to VODA, I maybe could have died if the counsellors from VODA hadn’t asked to rush me to the health centre for post-abortion care.

“We get a lot of referrals like Anne from VODA”, explains Grace, the midwife of the health centre. Most of the unsafe abortions among school girls are caused by unwanted pregnancies. “They go to local herbalists and they give them some drugs. Some of them tell me that they give them emilandira roots which they insert inside themselves to rapture the membranes.”

I am Pretty Lynn, aged 25. I am a sex worker but I went to university. I graduated with a Bachelor’s Degree in Tourism in 2013. But now, during the day I’m sleeping and during the night I’m working. That is how my day goes every day. I got into sex work through friends. Okay it is not good but I am earning. I tried to get a job when I graduated. I have been applying since I graduated in 2013. I’m still applying but I’m not getting anywhere. You know to get jobs in Uganda; you have to know someone there and no one knows me there.

To be a sex worker is like a curse. People look at you like, I don’t know, as someone that has no use in society. People look at you in a bad way. They even don’t consider why you are selling. They just see you as the worst thing that can happen in the society. So it is not comfortable, it is really hard but we try and survive. The fact sex working is illegal means you have to hide yourself when you are selling so that police cannot take you. And then you get diseases, men don’t want to pay. When the police come and take us, sometimes they even use us and don’t pay. So it is really hard. They want a free service. Like if they come and take you and pay that would be fair. But they say it is illegal to sell yourself. But they still use you yet they are saying it is illegal. You can’t report the police because there is no evidence.

Abortion and unwanted pregnancies are really common because men don’t want to use condoms and female condoms are really rare and they are expensive. Though at times we get female condoms from Lady Mermaid’s Bureau (LMB) because there are so many of us they can’t keep on giving you them all the time. At times when we get pregnant we use local methods. You can go and use local herbs but it is not safe. One time I used local herbs and I was successful. Then the other time I used Omo washing powder and tea leaves but it was really hard for me. I almost died. I had a friend who died last year from this.

A project like this one from Lady Mermaid’s can help young girls and women. But to take us from sex work, it would really be hard. They would not have enough money to cater for all of us. So what they have to do is to teach us how to protect ourselves, how to defend ourselves. Safe abortion yes. They will just have to sensitise us more about our lives, protection, female condoms and all that.

I don’t have a boyfriend but maybe when I get money and leave this job I will. But for now, no man would like a woman who sells. No man will bear the wife selling herself. And that will happen only if I get funds, settle somewhere else and become responsible woman. I don’t want this job. I don’t want to be in this business of sex work all the time. I want be married, with my children happily, not selling myself.