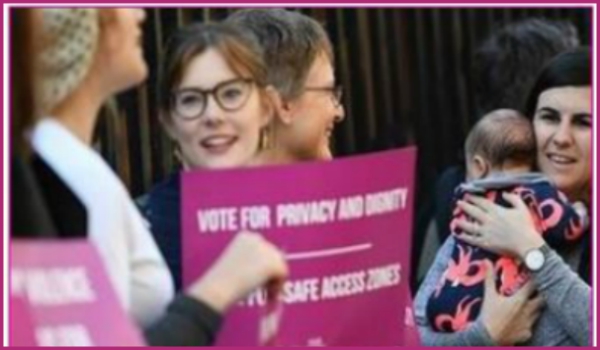 The New South Wales state government recently passed a law imposing a ban on anti-abortion protests outside abortion clinics. A commentary in response defends the ban by saying: “If you live in Victoria or one of the four other [Australian] states with such bans, then you won’t have seen one of these protests for a few years…. Still, I remember what the ‘protests’ looked like. They were misogynistic and repellent.” The author argues that “enforcing a no-protest zone contains an authoritarian element. But then so does Medicare… So do laws targeting drunk drivers. So do laws prohibiting assault, damage of property, stalking, arson, theft, extortion and so on.” In addition, he says: “My main objection, however, is that freedom to protest is not the main freedom in question. The freedom to access abortion is just as much a right – and one that anti-abortionists violate.”

The Irish Department of Health has been asked to consider measures to protect people from offensive imagery outside maternity hospitals and other health facilities as part of drafting the new legislation on abortion. The Health Minister said it is unacceptable that maternity hospitals have to issue warnings about graphic images outside their buildings.

A protest was planned for 20 June outside the offices of the Director of Public Prosecutions in relation to the use of graphic anti-abortion imagery at Irish hospitals and elsewhere by a group calling itself the Irish Centre for Bio-Ethical Reform. The imagery was criticised by both sides during the referendum campaign.

This came out after The Rotunda Hospital tweeted to let people know that there was an anti-abortion protest taking place outside the hospital and that they had notified the police. Some have argued that the police should be telling protesters to remove any such imagery.