Home » News » TURKEY – Being a woman in the Covid-19 pandemic: a research study

“Since 2019, more than 60 million people have contracted the new coronavirus (Covid-19) and over 1,200,000 people have lost their lives. Causing a major health crisis worldwide, Covid-19 has also further exacerbated current social and economic crises and created new inequalities; an outcome observed in many previous global pandemics.

“An analysis by the United Nations Development Program (UNDP) and UN Women reveals that by 2021, 435 million women and girls will be forced to live on $1.90 a day due to Covid-19.2 Furthermore, economic problems caused by the pandemic will take a toll mostly on women since (1) a greater number of women are employed in social sectors that have been worst hit by the pandemic including retail, tourism, and accommodation, (2) a greater number of women work in the informal economy, which has been significantly affected by Covid-19 and the measures taken against it, and (3) as people spend more time at home, women have been pushed to take on the role of primary caregiver, respond to demands of increased household production, and meet growing care needs for the elderly, sick, disabled, and children in the household, especially after schools were closed. As a result, due to Covid-19, while gainfully employed women face becoming more vulnerable or being pushed out of employment, all women – regardless of employment status – might end up working more without pay; in other words, they face impoverishment.

“As discussions continue on the upsurge of violence against women (VAW) during Covid-19 and the extent to which the pandemic might be responsible for the increase, reports on VAW from numerous countries show that the numbers have soared significantly. According to UN Women, from the third week of March onwards, calls to violence helplines increased 33% in Singapore, 30% in Cyprus, and 25% in Argentina; the number of women reporting violence increased by 30% in France; and the number of shelter applications climbed in Canada, Germany, Spain, the UK, and the US…. In Turkey, the number of calls to the ALO 183 Social Assistance Helpline increased after the outbreak, as a result of which they prioritised responding to these calls, and made it possible for women calling to report violence to do so by simply dialling zero.

“Given that Covid-19 has generated a major health crisis and exacerbated existing economic and social problems, states have been taking various measures since the outset of the outbreak. To monitor the measures enacted by governments worldwide in efforts to combat the Covid-19 crisis from a gender perspective under three policy categories, UN Women and UNDP launched the Covid-19 Global Gender Response Tracker. According to the data recorded by the Tracker, 992 of the 2,517 measures taken in 206 countries were gender sensitive (704 measures taken in 135 countries address violence against women and girls, 177 measures in 85 countries focus on women’s economic security, and 111 measures in 60 countries address unpaid care work). The Tracker also revealed that of the 28 pandemic-related measures taken in Turkey, only seven were gender sensitive (one measure on social protection, one on employment, and five measures to address VAW)….

“Although the Ministry has not shared any official data on whether these measures were actually realised, monitoring reports on VAW by the Mor Çatı Women’s Shelter Foundation since April 2020 reveal that public institutions have failed to fulfil their protection and prevention responsibilities, and that women who applied to such institutions encountered problems at various stages that prevented them from receiving the support they needed for protection against violence. Moreover, the framework of the measures described above shows that the government has turned them into a tool to further impose its policies on women, even in the current conditions of an ongoing global pandemic. In other words, rather than developing comprehensive social policies geared to women’s empowerment, inadequate and ideological pre-pandemic social policies that focus solely on the family have been maintained. Consequently, rights violations have been on the rise during Covid-19….

“A travel ban that came into effect on 3 April 2020 and was extended four times until 1 June 2020, for instance, is a case in point; at a time when entry and exit into 30 metropolitan municipalities was barred, it became even more to access abortion services that had already de facto been prohibited in health institutions. Due to this de facto prohibition, women during pre-pandemic times had been pushed into obtaining such services from private hospitals and clinics that chose to provide them (private health institutions can also choose not to provide abortion services). In a setting where abortion access was already quite limited and difficult, the pandemic sparked off a crisis in the health system, hospitals were turned into pandemic hospitals, and travel restrictions were put in place, making it even more challenging for women to access abortion services provided by only few institutions; thus, women face a higher risk of rights violations in terms of their right to obtain an abortion. Furthermore, the lack of any measures in Turkey addressing “unpaid care work” both prior to and during the pandemic reflects an understanding of social policy where women in the family are still considered responsible for shouldering the burden of such work. While 111 measures to address unpaid care work were taken in 60 countries, Turkey – where all education institutions, including pre-school education and care facilities have been closed since 16 March 2020 – has failed to introduce any regulations, placing the extra burden caused by the pandemic and other measures taken on women with zero support….

“Although the Covid-19 pandemic has had an evident negative impact on overall health, replies provided by the respondents revealed that mental health was much more adversely affected. While 79% of women defined their overall mental state has been “very good” or “good” prior to Covid-19, this figure dropped to 30% following the outbreak…. It could be said that restrictions on public space – initially imposed on people over 65, then extended to 18-year-olds and younger, and further extended to 20-year-olds and younger – took a toll on the mental health of people in these age groups.

“The 2018 Turkey Demographic and Health Survey (TDHS) conducted by Hacettepe University’s Institute of Population Studies reveals that the “unmet need for family planning” increased two-fold compared to findings from the 2013 TDHS. Pro-natalist population policies endorsed by the government has set back rights-based health services, making it difficult for women to access the contraceptive methods they need. Access to birth control services has become increasingly hard for women after the General Directorate of Mother and Child Health and Family Planning (ACSAP) – operational since 2003 under the Ministry of Health’s Transformation in Health Program – was shut down, subsequently followed by the closing of ACSAP Centers, which had been serving as primary healthcare institutions providing abortion services….

“Findings from the representative sample of the present study indicate that three in four women over 18 years of age have had at least one pregnancy in the past, and that one in four of these pregnancies were unplanned and unintended. This result seems to confirm the “unmet need for family planning.” The present study also showed that the rate of those who thought a woman could not easily terminate a pregnancy in a state hospital in Turkey has risen to 51%. This finding is thought-provoking in terms of the accessibility of abortion services in Turkey. A Monitoring Report on Sexual and Reproductive Health Services in Turkey by the Turkish Family Health and Planning Foundation notes that abortion services have been left to the decision of health staff during the pandemic, as was the case prior to the outbreak; however, the consequences of this practice might be much more dire during the pandemic due particularly to travel restrictions.”

[The report continues with information about women’s economic situation, staying at home, domestic work, care work, violence against women and more, and ends with a list of wide-ranging recommendations.]

Online demonstration in support of the Istanbul Convention in Turkey 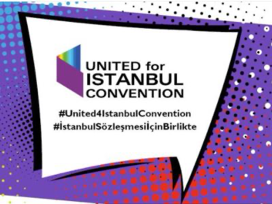 The online demonstration of United4IstanbulConvention Campaign; launched by Women for Women’s Human Rights (WWHR), highlighted the importance of the Istanbul Convention in preventing gender-based violence and protested the unlawful withdrawal of Turkey from the convention. Some 1,965 people and institutions from 63 different countries participated in the demonstration.