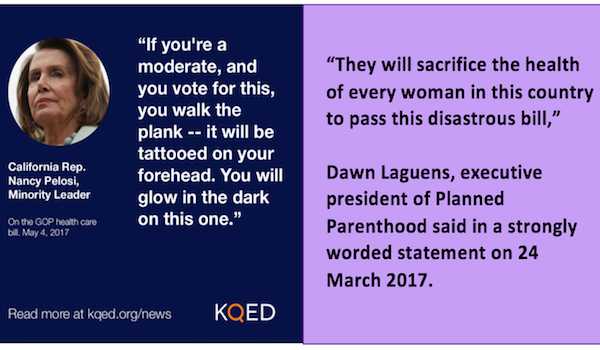 Republicans in the US House of Representatives passed the American Health Care Act on 4 May. It would strip 24 million people of health care coverage, gut Medicaid (government insurance programme for people of all ages whose income and resources are insufficient to pay for health care), eliminate affordable health insurance coverage for people with pre-existing conditions (affecting 25% of the population), and deny low-income people access to primary and preventive health care at Planned Parenthood clinics. Cancer patients will have to pay up to $140,000 a year for “insurance” before they can receive treatment, for example. And it would also eliminate the requirement that all individual health plans cover maternity care.

A provision in the bill temporarily blocks Planned Parenthood from participating in the Medicaid programme – a devastating blow to them and their patients. Planned Parenthood is a non-profit organization with clinics across the USA providing a range of reproductive health services, including abortions and other health care, to 2.5 million people annually.

It is far from certain that the bill will become law, as it is likely to encounter stiffer political and procedural obstacles in the Senate. The American Civil Liberties Union has threatened legal action to prevent it from becoming law as well. But it represents a significant, initial victory for conservatives, who had extracted a promise from Trump during his campaign that he would sign a bill defunding Planned Parenthood.