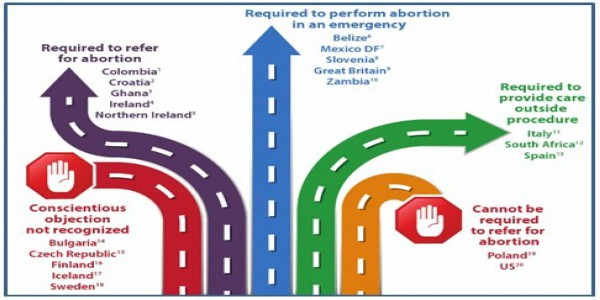 “A widespread assumption has taken hold in the field of medicine that we must allow health care professionals the right to refuse treatment under the guise of ‘conscientious objection’ (CO), in particular for women seeking abortions. At the same time, it is widely recognized that the refusal to treat creates harm and barriers for patients receiving reproductive health care. In response, many recommendations have been put forward as solutions to limit those harms. Further, some researchers make a distinction between true CO and ‘obstructionist CO’, based on the motivations or actions of various objectors.

This paper argues that ‘CO’ in reproductive health care should not be considered a right, but an unethical refusal to treat. Supporters of CO have no real defence of their stance, other than the mistaken assumption that CO in reproductive health care is the same as CO in the military, when the two have nothing in common (for example, objecting doctors are rarely disciplined, while the patient pays the price). Refusals to treat are based on non-verifiable personal beliefs, usually religious beliefs, but introducing religion into medicine undermines best practices that depend on scientific evidence and medical ethics. CO therefore represents an abandonment of professional obligations to patients. Countries should strive to reduce the number of objectors in reproductive health care as much as possible until CO can feasibly be prohibited. Several Scandinavian countries already have a successful ban on CO.”

The main text of the paper opens by saying: “Remarkably, pro-choice researchers and ethicists who support CO in reproductive health care rarely try to defend the practice beyond a simple assertion that individual conscience is an important right. Certainly this is true for everybody in general, but in the field of reproductive health care, there has been little or no recognition of how CO unjustly privileges doctors’ conscience over patients’ conscience, not to mention their life and health[1]. The granting of CO also gives legitimacy to the religiously-based assumption that abortion is wrong − however, providing safe abortion is an ethical practice that has saved the lives and protected the rights of millions of women. Moreover, doctors have obligations to their patients and the public. They occupy a privileged position of trust and responsibility in our society, and profit from a monopoly on the practice of medicine.”

An important argument they put forward is that the “largely religious and non-verifiable basis of CO makes the laws and policies that try to limit its exercise impossible to enforce”. Later, they continue: “Anyone can cite CO and lie or exaggerate. Or be sincere. Who knows? The only way we can judge is in rare evidence-based situations, such as when doctors in Italy and Poland are caught exercising ‘CO’ in public hospitals while doing abortions for profit in private clinics.”

But the crucial question they pose is: Is it possible to protect providers’ claimed right to refuse to treat patients and patients’ right to health care at the same time? Their answer is: the more objectors there are, the less possible it is to protect patients’ right to health care. So they argue that “as a first step towards mitigating the harms of CO, countries could at least require all publicly-funded hospitals to provide abortions, as Portugal has done”. Finally, they call for countries “to steadily reduce the number of objectors and eventually abolish CO, not save it.”