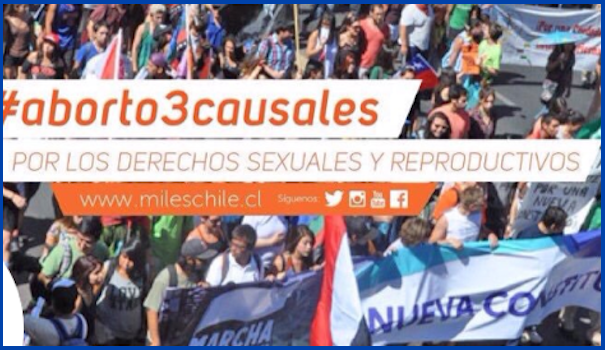 The Chilean Senate in committee is moving again on the abortion bill. This bill has gone further in the legislative process than any previous one since democracy was reinstituted in Chile. The current Committee set the dates of 17 July from 3pm to 9pm and 18 July from 3pm until the debate closes with a vote, to discuss the bill yet again and finalise its clauses. First, on 17 July, reports on the discussions in the previous months in the Commissions on Health, Constitution and Finance were tabled by their chairs.

Some Senators are talking about trying to bring back clauses that were rejected in these previous rounds of debate – some want to bring back in more liberal clauses, others more restrictive ones. One point of continuing contention is how many staff in an abortion clinic can claim conscientious objection. One senator stated he was going to vote against rape as a legal ground.

Observers on both sides of the question were in the balcony watching the proceedings, which are ongoing as we write this. When this session finalises the clauses in the bill, it will be reviewed by the entire Senate.

Claudia Dides, Director of Corporación Miles said: “We are very pleased to have reached this stage, in spite of the years of delay on the part of the most conservative sectors. There are some things we don’t like, but this is certainly positive news and we hope that on 18 July they will approve the three grounds of the bill , including the ground of rape”.

It is now two and a half years since the bill was first tabled by President Michelle Bachelet in January 2015.