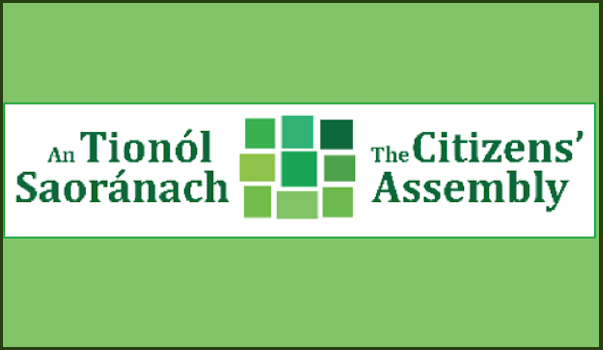 The report and recommendations of the Citizens’ Assembly (the Assembly) on the Eighth Amendment to the Constitution have been laid before the Houses of the Oireachtas (parliament) today by Chair of the Assembly Ms. Justice Mary Laffoy. According to the terms of reference establishing the Assembly, the report will now be referred for consideration to a Committee of both Houses which will in turn bring its conclusions to the Houses for debate.

In her introduction to the report, the Chair of the Assembly Ms Laffoy, said her primary objective in the drafting of the report was “To ensure that there is a clear, complete and accurate record of the work of the Assembly on the Eighth Amendment of the Constitution and to demonstrate what happened both before and at the meetings, so that there is openness and transparency on the manner in which the members were informed on this topic.

The Assembly met for five weekends on the topic of the Eighth Amendment and the report outlines how the Assembly began consideration of the topic and how this progressed. Ms Laffoy said “The Assembly is an exercise in deliberative democracy which is based not on a competition between conflicting interests, but on an exchange of information and justifications. The model of deliberative democracy shifts the emphasis from the outcome of the decision to the quality of the process.

“Therefore, the importance of structuring a discussion on the Eighth Amendment, one of the most complex and divisive subjects in public life in Ireland, in a manner which was balanced, fair and above all informative and evidence based, became my guiding principle. By approaching the work programme this way Members could listen to the content presented and were not burdened with having to consider if the information they were hearing was driven by subjectivity or personal views. Advocacy groups were heard from in a distinct series of sessions. This evidence-based approach to discussion and policymaking is standard best practice. However, the history of the debates on this issue demonstrates that this approach has not usually been adopted in the past.”

The substantive recommendations of the Assembly were the result of the ballots which took place in April on the final weekend of the Assembly’s discussions on the topic… The Assembly then made further recommendations about what should be included in this legislation. Specifically, the reasons, if any, for which termination of pregnancy should be lawful in Ireland, as well as any gestational limits that should apply were addressed. The report details the development of the draft Ballot Papers, amendments made by the Members and the results of each Ballot.

Ms Laffoy said “It is essential that the Oireachtas understands the backdrop for these decisions and the context in which those recommendations were made in this very complex area of law.

“Put simply, most of the members voted that they wanted to remove Article 40.3.3° from the Constitution and for the avoidance of doubt to replace it with a provision in the Constitution, which would make it clear that termination of pregnancy, any rights of the unborn, and any rights of the pregnant woman are matters for the Oireachtas. In other words, it would be solely a matter for the Oireachtas to decide how to legislate on these issues.”

In feedback over the five meetings the members indicated that they also wanted to see wider policy issues, as distinct from just legal changes, reflected in the recommendations of the Assembly. At the final weekend of the Assembly’s consideration of the Eighth Amendment, members were invited to write down their comments and suggestions on further recommendations. Five ancillary recommendations which the Chair included were to do with improvements in sexual health and relationship education; improved access to reproductive healthcare services for all women – to include family planning services, contraception, perinatal hospice care and termination of pregnancy if required; the same standard of obstetrical care, counselling and support facilities for pregnant women both during pregnancy and, if necessary, following a termination of pregnancy, throughout the country. And that further consideration should be given as to who will fund and carry out termination of pregnancy in Ireland.

The decriminalisation of abortion, including the use of the abortion pill; and recognition of and protection of female reproductive rights and autonomy; were also provided in the responses from the Members.

The Chair also expressed her gratitude to the Assembly members and urged the members of the Oireachtas to view their recommendations with “the respect and due consideration that they deserve”.

The full report and recommendations on the Eighth Amendment to the Constitution can be found here.