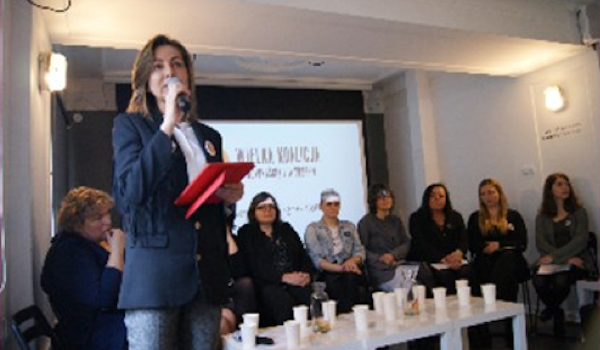 The Great Coalition for Equality and Choice, consisting of over 80 non-governmental organizations from all over Poland, has been established as a reaction to an offensive by anti-women groups. These threatening actions include regular draft bills directly attacking the life and health of women, restricting access to emergency contraception, frightening doctors in their workplaces, shocking anti-abortion campaigns, fighting against comprehensive sexuality education, as well as the systemic weakening of the protection of women against domestic violence. These actions call for active and organized resistance on the part of civil society.

We draw our strength from the 200 year old tradition of female political and civic activities. We have the knowledge and practical NGO experience, as well as the social energy of the pro-women’s rights protests of 2016 and 2017.

The Coalition’s goal is the comprehensive fight for women’s human rights: quick threat identification, coordination of legal activities, and building social awareness. The group demand sexuality education, good standards of perinatal care, the fullness of reproductive rights, and the total elimination of violence against women. In the coming weeks, we will shape the actions of the Coalition.

The current legal regulations on the termination of pregnancy do not work in practice. Almost every attempt to obtain a legal abortion encounters resistance from gynaecologists or hospitals directors. In 2015 the Constitutional Tribunal released doctors from the duty to refer the patient to another specialist who is able to perform the service. Now, entire public health care facilities, or even provinces, are entitled to claim “conscientious objection”. Desperate women head to foreign clinics, even when theoretically they have a right to a legal abortion in Poland. We will persist in trying to liberalize the law. We want 21st century Polish women to be able to have the same standards as other European women. Only ideology stands in the way.

The actions of anti-abortion activists penetrates deeper and deeper into the everyday lives of citizens. There is systematic pressure on hospitals performing abortions on medical grounds. The local authorities fail to react to anti-abortion propaganda in public spaces – for instance setting up large boards with photos of bloody remains of developed fetuses captioned “This is how children are being murdered in Polish hospitals”. Frequently, the image of Hitler is placed nearby, with a caption equating termination of pregnancy with the Holocaust, i.e. as the legacy of Nazism. Such campaigns are also openly directed at children. Dolls named “Little John” that are supposed to symbolize potential abortion victims are handed out in schools. Anti-abortion art competitions for children are also organized.

In hospitals, despite many complaints from women giving birth, there is no reaction to the so-called “defenders of life” visiting maternity wards. At the same time, standards of perinatal care are being disregarded, which in recent months has led to more deaths of women, reported as tragic accidents or medical errors. But that is not all. The lack of education and awareness in sexual health results in a rapid increase in sexually transmitted infections, including HIV/AIDS, gonorrhoea, and until recently thought to have already been eliminated, syphilis. Furthermore, the typically female cancer screening programmes are being discontinued.