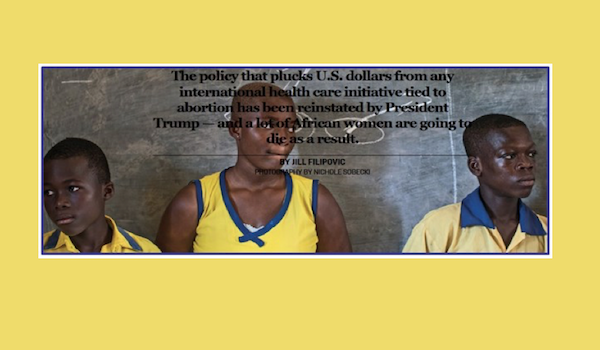 “Fred Gbagbo recognized the woman right away, even though the blood had drained from her face and was instead pooling between her legs. There was no trace of the pushy, even demanding young woman in this listless body lying semiconscious in front of him. During their first encounter just hours earlier, he’d concluded that she was a devil trying to tempt angels. Now, seeing her so pale, he wasn’t so sure.

“That morning, she had interrupted a pre-work prayer he was conducting with other student doctors in the gynecology unit of a teaching hospital in Ghana; she was pregnant, she said, and she wanted an abortion. Gbagbo and his colleagues, devout Christians all, knew what to do. They told her no, preached her the Gospel, and sent her on her way, proud they had so uncompromisingly cast her out, certain they had deterred her from sin.

“But here she was back again, and Gbagbo couldn’t shake the nagging, nauseating feeling that perhaps it was he who had sinned. Their examination revealed a perforated uterus, the likely result of an attempt to perform the abortion herself, or the botched efforts of a local freelancer; either way, she wasn’t talking, and her body told only the worst of the story. They took her to the operating room, but it didn’t matter. She died there hours later, a first-year medical student and her parents’ only daughter.

A decade later, one question still haunts Gbagbo: ‘Who killed this poor girl?’