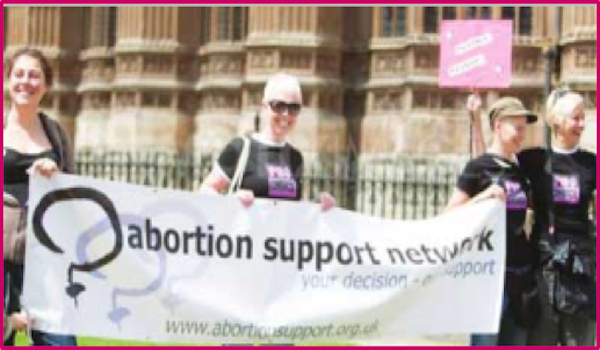 The 2016 abortion statistics published by the Department of Health this week show minimal differences in the numbers of women travelling to access a safe, legal abortion in England, and showing a slight decrease in the number of women travelling from the Republic of Ireland, Northern Ireland and the Isle of Man. However, these numbers do not reflect the thousands of women from these islands who are accessing abortion pills from the internet instead of travelling to England.

What these statistics also do not show is that there has been a steep increase in calls from these countries to the Abortion Support Network (ASN), a tiny charity which provides financial assistance, practical information and accommodation to women forced to travel to England to access an abortion. In 2016, ASN received calls and e-mails from 801 women, couples and families looking for help and financial assistance.

This is an increase of 24% over the 2015 figure of 648. In fact, the number of people contacting ASN for help has been increasing each year and has grown an overall 112% since they began in 2009. This increase is partly related to the fear of prosecution for self-use of medical abortion pills, as reported by many of ASN’s callers, who would have preferred to use medical abortion pills at home. ASN has also heard from an increased number of exceptionally vulnerable clients, who would not have had any hope of accessing care without enormous amounts of financial and logistical support.

Mara Clarke, ASN Director, said: “The Department of Health statistics can only tell how many women gave an Irish, Northern Irish or Isle of Man address at a UK family planning clinic; ASN knows these numbers only tell part of the story. They do not include the women who give the address of a local friend or family member, the women who travel to other countries to access abortions, or the thousands of women who are obtaining early medical abortion pills online. These numbers also do not capture the women who cannot travel – women who need, but cannot obtain, passports or visas needed to travel; women who cannot escape from violent partners; women who do not have someone who can provide childcare from 5 am until late at night; and women who do not have the £400 to £2,000 it costs to travel to England and pay privately for an abortion and who don’t know that ASN exists and can help them.”

These are some examples of the people who contacted ASN in 2016:

“Our 15-year-old is having an abortion and before we found your page we planned to borrow money from a loan shark to help her.”

“Could someone call me urgently as I do not have enough credit on my phone to call UK numbers.”

“I am pretty sure my ex-partner will kill me if he knows I am pregnant.”

“I’m already a single mother to a child with a disability so I’m not in a position to have another child at the minute, we are living with family and can’t afford to move out. I can’t work because even with a job I can’t afford childcare.”

“I am about 21 weeks pregnant and unfortunately baby has been diagnosed with a major fetal abnormality. My doctor will not advise just want me to wait for more scans and time is running out. This is a wanted pregnancy and I’m devastated by the diagnosis and also really frustrated that my doctors can’t or won’t tell me anything about ending this.”

“I have a pregnant teenage daughter who doesn’t want to keep the pregnancy. We tried to get the pills online but they were stopped by customs.”

“I am pregnant from a rape and I cannot go through with this pregnancy. I have never left this country and it scares me and finding the money feels impossible. I am absolutely lost and feel alone. I would be so grateful if anyone cared enough to get in touch with me.”

“I contemplated suicide to get away from this, as I really just couldn’t go on with my life if I have to remain pregnant.”

“I need an abortion as I am trying to leave an abusive partner and a child would tie me to him forever.”

“I went to a pro-life agency and they told me they thought my baby was a boy. They told me if I took the abortion pill it could damage my DNA and any children I had in the future would be disabled.”

“You are the only people we’ve reached out to for help who have called us back.”