Home » News » The Feminist Forum is a space of learning, exchange and discussion for feminists in the Dominican Republic.

On 20 July, they called on President Danilo Medino to stop the process of discussion of the clause in the new Penal Code in the Senate that would make all abortions subject to a prison sentence of 4-10 years. They said that since his party, the PLD, has an absolute majority, they have the power to do so. On the same day, Dr Waldo Ariel Suero, President of the Dominican Medical College (CMD), said that the criminalization of abortion in the Penal Code by the Chamber of Deputies will encourage clandestine abortions and increase maternal mortality.On 25 July, Lourdes Contreras, coordinator of the Centre for Gender Studies of the Santo Domingo Institute of Technology, said the decision of the Chamber of Deputies to exclude exceptions to the criminalization of abortion from the Draft Criminal Code was shameful and showed a disappointing lack of appreciation of the lives of women on the part of the members of the Lower House and contravened the spirit of the Dominican Constitution, which recognizes equality between men and women. 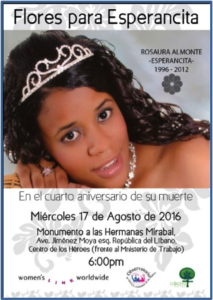