Home » News » The Argentinian case of Belen: A sentence with international repercussions

Only a few days after the Tucumán criminal court refused to release Belén, aged 27 years, who suffered a miscarriage but was sentenced to eight years in prison, having already been detained awaiting trial for two years and two months, her case was taken up in a public hearing convened by the Commission on Human Rights and Guarantees of the Chamber of Deputies of Argentina, chaired by Congresswoman Victoria Donda. The hearing was entitled: “The role of the State in relation to violence against women: torture and other ill-treatment in the field of sexual and reproductive health”.The UN Special Rapporteur against Torture, Juan Méndez, requested information on Belén’s case, to assess whether her human rights had been violated and if so, to make a complaint – or in the jargon what is called a communication to the Argentine State, to explain its actions. He told Página/12: “Some women are subjected to cruel and inhuman treatment, and discriminatory and patriarchal attitudes, when they seek to access to health care and they have rights covered in the law,” at the end of his presentation to the public hearing.Her imprisonment continues to generate public statements against the sentence, and has also became the subject of a campaign by Amnesty International that has already gathered around 24,000 signatures from different countries, among them France, Taiwan, United States, Belgium, Poland and Norway, demanding that she is released.Méndez referred to his recent report, which provides a gender perspective on the torture and other cruel, inhuman and degrading treatment or punishment, with a focus on sexual and reproductive rights in health care environments.”Women and girls are victims of multiple forms of violence. One of these is developed in the field of sexual and reproductive rights, through laws, policies and practices by the State aimed at controlling their lives and their bodies,” said Mendez. “When the State perpetuates stereotypes and gender discriminatory prejudices, it allows prohibited acts to be committed with impunity that are in breach of its duty to prevent these acts.”At the meeting also was Soledad Deza, Belén’s solicitor since her case was made public, and a member of Catholics for the Right to Decide. “Belén today feels she has support, for which she is very grateful,” Deza said, referring to the support of legislators, human rights and women’s organisations. The room where the hearing took place was decorated with green handkerchiefs, symbol of the National Campaign for the Right to Abortion (Campaña Nacional por el Derecho al Aborto), who are calling for the decriminalisation of abortion and who also participated in the hearing. 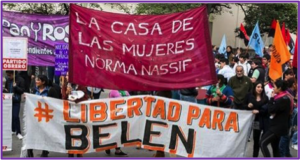