Home » News » The appeal of Purvi Patel against 20 years in prison in Indiana, USA

by National Advocates for Pregnant Women”In the last few months there has been a major outcry in response to the suggestion that women themselves might be arrested for having abortions. Since its inception, National Advocates for Pregnant Women (NAPW) has been the organization challenging the arrests of pregnant women and the leading organization defending women who have been punished for having abortions, experiencing pregnancy losses and for giving birth.”On Monday, May 23, 2016 Ms Purvi Patel will fight her conviction and 20-year sentence in the Indiana Court of Appeals. In July 2013, Purvi Patel, a 33-year-old Indian-American woman, went to a hospital emergency room bleeding and seeking help. She explained that she had been pregnant and had disposed of the fetal remains in a trash bin. With assistance from some of her own physicians, police arrested Ms Patel, who was eventually charged with and convicted of feticide and neglect of a dependent and sentenced to serve 20 years in prison. She has already been locked up for more than a year in the Indiana Women’s Prison.”Although Indiana has no law permitting punishment for having or attempting to have an abortion, prosecutors misused the state’s feticide law – passed to protect pregnant women from violence to — instead, re-criminalize abortion and send Ms. Patel to prison. And because the prosecution did not have any actual evidence that Ms. Patel had a live birth and neglected a newborn, the prosecution focused on her actions and omissions during pregnancy, including her abortion – to win a conviction on the charge of neglect of a dependent.”NAPW has advocated on behalf of Ms. Patel from the beginning because we believe that there is no point in pregnancy when a woman should lose her civil and human rights. We know that bringing criminal charges against people for ending a pregnancy, experiencing a miscarriage or stillbirth, or for being pregnant and giving birth, puts all pregnant people at risk. NAPW knows that punishing women who have sought healthcare, will deter health care, endangering maternal, fetal and child health. And we know that empowering the state to punish pregnant women means that low-income women and women of color will be especially targeted for arrest and incarceration.”The Indiana Court of Appeal’s summary of the case is as follows:“Purvi Patel purchased misoprostol and mifepristone from a Hong Kong pharmacy online and used those drugs to terminate her pregnancy at home. She delivered a live baby of approximately 25 weeks’ gestation who died shortly after birth. She did not seek medical care until after the baby died. Patel was charged with and convicted of neglect of a dependent as a Class A felony and feticide, a Class B felony. On appeal, Patel argues that her neglect of a dependent conviction should be reversed because it is not supported by sufficient evidence. She also argues that her feticide conviction should be reversed because the feticide statute is either inapplicable or unconstitutional in this situation.”NAPW’s legal arguments in support of the appealNAPW filed an amicus curiae (friend of the court) brief on behalf of more than 85 organizations and individuals. Their main arguments for Ms Patel in the case are as follows:”With regard to the neglect charge, there are powerful reasons to challenge the conclusion that there was a live birth. But even without such a challenge, the evidence – viewed in the light most favorable to the prosecution – failed to prove three essential elements of the offense: () that Purvi ever knew there was a live birth; (2) that there was anything Purvi possibly could have done – or known to do to save the baby within the less than a minute that it could have lived; and (3) that any omission resulted in the death of the baby. Any one of these deficiencies of proof compels reversal.”Moreover, multiple errors in interpreting the Feticide Statute require reversal. To begin with, the Feticide Statute has no role in criminalizing unlawful abortions, which are dealt with through a separate statute. And even if the Feticide Statute does deal with abortions, it certainly does not expose a woman to prosecution for her own abortion. Additionally, were the Court to interpret the Feticide Statute as the prosecution seeks, that statute would violate both the United States and Indiana Constitutions by placing an “undue burden” on a woman’s right to choose an abortion. Finally, the Feticide conviction depended on the plainly wrong position that one can be guilty of Feticide (i.e. the killing of a fetus) even if no fetus is ever killed (as the State adamantly maintains was true here).”The main points of the argument were these:

Two of the judges’ questions during the hearing:– How can they show that she endangered the child if they can’t even know the baby was alive?- Doesn’t it cause absurd results to exempt women from prosecution under abortion law but charge them under feticide? #FreePurvi @NAPW 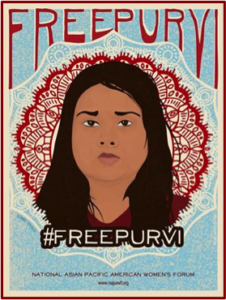