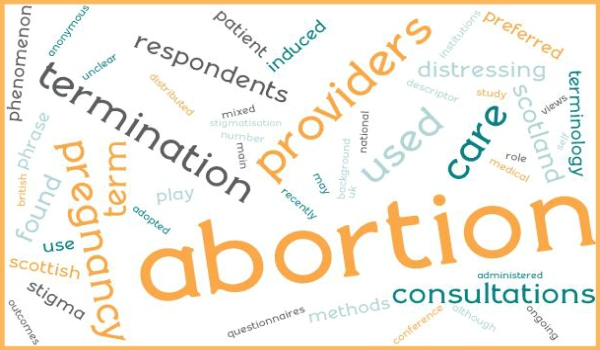 Background The phrase ‘termination of pregnancy’ has recently been adopted by a number of British medical institutions as a preferred descriptor of induced abortion. How it is used by abortion care providers is unclear, although the ongoing stigmatisation of abortion may play a role.

Methods A mixed methods study of the views of abortion care providers in Scotland, UK. Self-administered anonymous questionnaires were distributed to abortion care providers at a national conference (Scottish Abortion Care Providers). The main outcomes measured were the proportion of respondents reporting that they found the terms ‘abortion’ and ‘termination of pregnancy’ to be distressing, and their preferred terminology for use in consultations with women. In-depth interviews were conducted with 19 providers from a single clinic in Scotland to contextualise use of the terminology.

Results The questionnaire was completed by 90/118 delegates (76%). More respondents indicated they found the term ‘abortion’ distressing (28%), compared with those who found ‘termination of pregnancy’ distressing (6%; p<0.0001). Interview participants reported that ‘termination of pregnancy’ was the default phrase used in consultations. Some respondents stated that they occasionally purposely used ‘abortion’ in consultations to emphasise the seriousness of the procedure (morally, physically and/or emotionally).

Conclusions ‘Termination of pregnancy’ is the most commonly used term to describe induced abortion in patient consultations in Scotland. This and the term ‘abortion’ appear to play different roles, with the former being used euphemistically, and the latter as a more emphatic term. Further research is warranted to investigate how this interacts with patient care, service provision, and abortion stigma.

Editor’s note: This article exposes what can only be seen as a disturbing reflection of the existence of stigma in how Scottish abortion providers see abortion (and not just the word), and raises the question of whether this is a wider phenomenon or a local one. It challenges us all to consider how to address this if it is a common phenomenon.