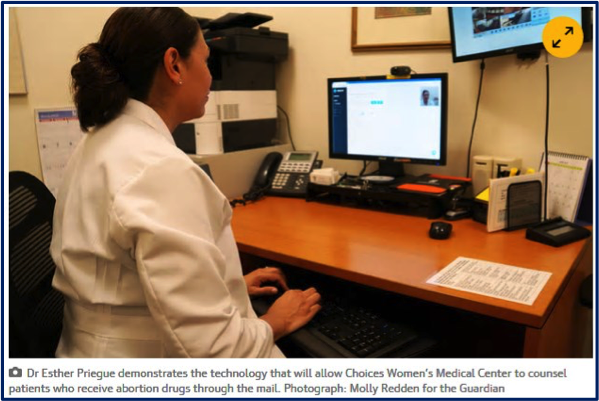 Access to abortion in the United States is increasingly constrained. At least four states have only one abortion provider. [1] Since 2011, at least 162 abortion providers have closed, while only 21 have opened. [2] Expenditures of money and time to reach the nearest clinic, as well as for lost wages and childcare, can be a substantial hardship for many women. [3] This hardship is so substantial that many women are considering forgoing formal care altogether – in 2015 there were more than 700,000 Google searches in the U.S. looking into self-induced abortion. [4]

One approach to increase access to abortion is the use of telemedicine. Medical abortion with mifepristone and misoprostol is perhaps an ideal fit for telemedicine. In the early first trimester the treatment has few contraindications, a very high efficacy rate, and a very low rate of major complications. [5] In current models of telemedicine abortion in the US, provided by Planned Parenthood of the Heartland and Whole Woman’s Health, a woman has pre-abortion assessments performed at a clinic that stocks the abortion medications but does not have a physician on site. The remote physician reviews the results of the assessments, speaks with the patient by videoconference, and then authorizes the clinic to dispense the medications.

While this model was shown to have increased the number of sites in Iowa offering abortion services, [6] it still requires the patient to visit a clinic that has mifepristone in stock (since unlike misoprostol the medication is prohibited from being distributed in pharmacies). An alternative model uses a direct-to-patient approach, in which the medications are provided directly to eligible patients by mail. The patient obtains the screening results locally, and she can speak with the clinician from her home.

Gynuity Health Projects is developing, implementing, and evaluating a direct-to-patient telemedicine service, called TelAbortion. Outcomes of this pilot study include: interest in the TelAbortion approach; feasibility of the TelAbortion procedures; safety; and acceptability to women and providers. Fifty women in New York, Hawaii, Oregon and Washington State will be enrolled. The study has launched in New York and is anticipated to begin in the other sites later in 2016. The service will be designed to incorporate all of the standard steps in medical abortion (Box 1), thus ensuring that the quality of care provided to each patient is the same as she would receive if she presented in person to an abortion facility. Gynuity’s hope is if TelAbortion proves to be a feasible model, it can be expanded to other states with favorable laws. 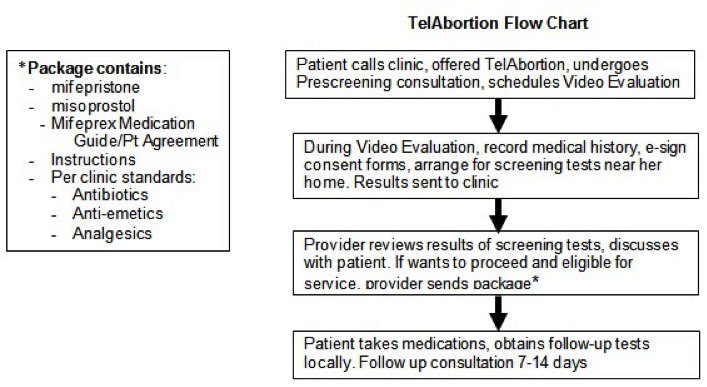 “It’s the future,” said Esther Priegue, the director of counselling at Choices Women’s Medical Center in New York, where the first of the pilots was launched in March 2016. She spoke in her office, after walking through a waiting room thronged with women, many of them holding young children. “Especially in the times we’re living in today, women experience so many struggles getting through our doors. They’re mothers. They work. Imagine if they could do it all from home, and never have to step into the clinic for even a moment.” [7]

The study is the creation of Beverly Winikoff, Elizabeth Raymond, and Erica Chong of Gynuity, a New York research group which seeks ways to expand reproductive healthcare access with technology.

The study may also finally deliver on what reproductive rights advocates have always seen as the true promise of medical abortion drugs: abortion without the clinic. “We always thought this drug was going to totally revolutionize how abortion was provided,” said Daniel Grossman, a professor with the obstetrics and gynecology department at the University of California, San Francisco, who has studied telemedicine and abortion. “This is moving us closer to what women’s health advocates see as the real potential of medical abortion… “There’s no medical reason why the pill has to be physically handed out by a clinician,” said Grossman. “This is such an incredibly safe medicine … There’s no reason to have any concerns about the safety of this model.” [7]

Dr Paul Hyland, who runs the Tabbott Foundation in Australia, a similar telemedicine service designed for rural women, said that despite the likely opposition, Gynuity should exhilarated. “Mifepristone is the most revolutionary drug in reproductive medicine since contraception. It’s amazing that this can be provided so easily and that we’ve taken such a long time to realize its true potential.”