Home » News » TANZANIA  – How many more years will Tanzania ignore the deaths and complications of illegal, unsafe abortions

It costs the Tanzanian government Sh10.4 billion per year for treating women who need post-abortion care for complications of dangerous abortion Even so, 60% of women needing such care do not receive it.

One woman’s story: Martina, age 35, says getting access to family planning education is still challenging for some age groups, especially for both primary and secondary schools and even for some university students. She recalls 15 years back when she joined university and went through a traumatic situation after finding out she had fallen pregnant. She was not ready to have a child and did not want to disappoint her parents. She had no money to support her pregnancy or the baby. She never knew how to count her menstruation cycle. She knew she could fall pregnant but knew nothing in detail. Her former boyfriend suggested they go for an abortion at the health centre. They both agreed, but they did not get what they wanted – the supposed health expert who attended her caused her heavy pain but the abortion was unsuccessful.

“I will never be able to forget that pain. It has been 15 years but I still feel it to date. I screamed so much that the entire health centre heard my voice. By that time I was bleeding heavily. They had to call a taxi to take me to the central office while bleeding. As we left for the hospital, the health centre staff warned me to stay silent as soon as we arrived at the central hospital and they will tell them that I had an accident that made me over bleed and I needed PAC services urgently.” The lie helped out and she was admitted and got all the medical attention she required, but she realised that had she has known better, she would have been more careful.

The article says: An additional 114,272 Tanzanian women need this care annually but do not receive it. The article asks: “Where do all the women who are unable to receive the PAC go for help?” No answer is provided. Instead, the article promotes contraception methods at length, and then ends. 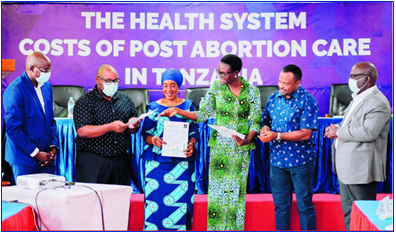