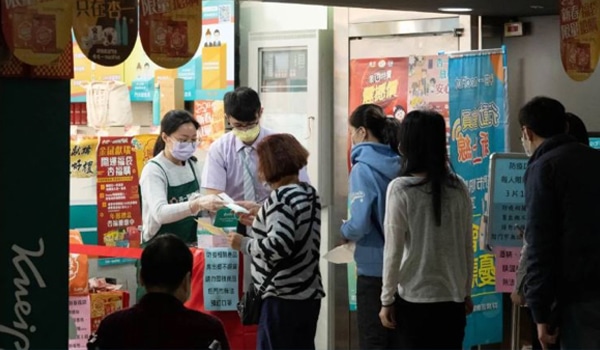 “Taiwan is 81 miles off the coast of mainland China and was expected to have the second highest number of cases of Covid-19 due to its proximity to and number of flights between China. The country has 23 million citizens of which 850,000 reside in and 404,000 work in China.In 2019, 2.71 million visitors from the mainland travelled to Taiwan.As such, Taiwan has been on constant alert and ready to act on epidemics arising from China ever since the SARS epidemic in 2003. Given the continual spread of Covid-19 around the world, understanding the actions that were implemented rapidly in Taiwan and the effectiveness of these actions in preventing a large-scale epidemic may be instructive for other countries.

“In Taiwan, public health officials saw the pandemic coming, and took action before China did. Nearly three months after reporting its first confirmed case of Covid-19, this country has only reported348 positive diagnosesand five deaths. It was one of the earliest countries to be hit and has one of the lowest infection rates. But WHO (in deference to China) refuses to recognize Taiwan as a sovereign state. Despite early warnings from Taiwanese officials, the organization kept the island cut off from its global information networks. Now, it may be the rest of the world that’s paying the price.Before nightfall on December 31, the country decided to begin health inspections for all passengers arriving on flights from Wuhan. Two weeks later – amid continued reassurances fromChinese and WHO officialsthat there was no need for alarm – Taiwan dispatched two of its health experts to the city in Hubei province, where they found a significant likelihood that the coronavirus was capable of human-to-human transmission. This virus, they reported on January 16, could be far more dangerous than initially assumed, noting that Wuhan’s local doctors were taking the disease very seriously as well.

“It would be four more days before the Chinese government officially acknowledged that the virus could be transmitted between humans. In the meantime, Wuhan had hosted a 40,000-household dinner to celebrate Lunar New Year and millions of people had left the city for the holiday, dispersing across the country at the worst possible time.By the time Taiwan confirmed itsfirst caseof Covid-19 on January 21, the country was arguably more prepared than any other place in the world. Itmobilized its Central Epidemic Command Center– a rapid-response agency formed in the wake of the 2003 SARS outbreak – to implement quarantines and conduct drills at hospitals. Citizens were asked to stay calm and assured that they would all be able to buy surgical masks, as production of the masks ramped up into millions per day. Soon after, Taiwanese masks weretemporarily banned from export.In spite of its decisive response, Taiwan was shut out of theWHO’s emergency meetingon January 22, where representatives from 16 countries – including China, Japan, South Korea, and USA – opted to delay declaring Covid-19 a global health emergency…

“WHO finally declared aglobal health emergencyon January 30, when nearly 8,000 cases had been confirmed by Chinese authorities, hundreds of people had died, and the virus had surfaced in at least 18 countries outside of China.Taiwan has so far avoided mass deaths anddonated 10 million surplus masksto places including Italy and the United States.”

On 5 April, as crowds of people left their homes to conduct tomb-sweeping rituals during the four-day Tomb Sweeping Festival, the Central Epidemic Command Center (CECC) urged members of the public to practice good personal hygiene, follow social distancing recommendations, and avoid going to crowded places after the festival. Members of the public are urged to wear face masks if they are unable to observe social distancing. The CECC also urged riders of public transport to wear face masks all the time and undergo temperature checks before entering a bus or MRT station. Those who refuse to wear face masks on public transport after being advised to do so will be fined up to NT$15,000. If people feel unwell, they are urged to wear face masks and inform the physician of any history of travel, occupation, contact, and cluster, to facilitate timely diagnosis and prompt case-reporting.

Anyone who tests positive for the virus in Taiwan is kept in hospital in isolation and released only when a test shows they are virus free again. The Central Epidemic Command Center sends out daily press releases with public health advice. On 6 April, theCentral Epidemic Command Center reportedthat “920 additional cases related to Covid-19 were reported on April 5. As of writing, a cumulative total of 37,219 cases have been reported among which Covid-19 has been ruled out in 33,128. Of these reported cases, infection with COVID-19 was laboratory-confirmed in 373 cases. Of 373 confirmed cases in Taiwan, 321 are imported and 52 are indigenous. Of the confirmed cases, there have been 5 deaths, and 57 patients have been released from isolation while the remainder remain hospitalized in isolation.”

On April 6, theCentral Epidemic Command Centerurged members of the public who had visited crowded places during the four-day Tomb Sweeping Festival to conduct self-health management for 14 days, avoid public places, put on face masks when going out, and work from home as much as possible in order to ensure the safety of the entire nation. If people feel unwell, they are urged to call the toll-free Communicable Disease Reporting and Consultation Hotline, 1922 (or 0800-001922), and inform the physician of any history of travel.

SOURCES: JAMA, Response to COVID-19 in Taiwan: big data analytics, new technology, and proactive testing, by C Jason Wang, Chun y Ng, Robert H Brook, 3 March 2020 ; The Nation, The WHO ignores Taiwan: the world pays the price, by Wilfred Chan, 3 April 2020 ; PHOTO: Gene Wang/Getty Images: Taiwan’s government made masks available to all, but limited the number that each person could buy per day.