On 16 August, the Supreme Court of Justice of Tucumán in Argentina finally ordered that “Belén”, the young woman unjustly convicted of homicide after having had a miscarriage, should be released from prison, in the face of growing criticism by dozens of feminist, human rights, political and social organizations and the UN Human Rights Committee. However, 24 hours later, she had not yet been released, according to Amnesty International, who had collected 120,000 signatures on a petition calling for her release.The decision was announced after demonstrations on 12 August in cities across the country, convened via the hashtag #LibertadParaBelén, with the epicentre in the capital of Tucumán. Belén has been in prison since March 2014, after she attended the Hospital Avellaneda with strong stomach pains, unaware that she was pregnant, and miscarried in the hospital. Although she was initially diagnosed with the miscarriage of a 20-week pregnancy, she was then accused of homicide of a 32-week pregnancy. She was held in pre-trial detention for 2 years and then sentenced to 8 years. 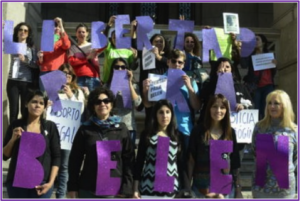 In a statement on the case, Católicas por el Derecho a Decidir Latin America Network said this month:“As Catholics, feminists, and defenders of women’s human rights, we maintain that this type of court judgment shows the strong interference of religion in existing legislation and the weak division of church and state in the provinces, aspects that disproportionately impact women’s lives, including their reproductive sovereignty and freedom. This is not an isolated case in Latin America. The case of María Teresa Rivera in El Salvador, who was sentenced to 40 years in prison and subsequently released, is another example of the thousands of cases that occur across the region, representing an extreme violation of women’s rights to access health services and life-saving treatment. Rulings in cases like Belén’s are judicial validation of the violation of doctor–patient confidentiality, and put pressure on health care professionals to report women seeking medical attention following an abortion or a spontaneous miscarriage. This is tantamount to the dehumanization of health services, and forces women to face a dire choice: jail or death. A judicial system that privileges the religious or moral world views of individual members of the court over international human rights standards represents a miscarriage of justice for all women, exacerbates existing social inequality, …violates a woman’s right to physical and mental health, removes any possibility of reproductive justice, reinforces women’s subordination, and deepens the patriarchal structure that creates conditions – particularly within low-income communities – where the only choice women have is between an unsafe abortion or forced motherhood.”On 10 August, Soledad Deza, Belén’s solicitor, told us: “The national and international impact of the Belén’s case is strong. As Belén’s solicitor, knowing all the details of the case, I can say that it involves multiple violations of her rights and exposes the vulnerability of the physician–patient relationship when the issue is thought to do with abortion. Belén’s case is more than just another court case, it is about the consequences of a pregnancy which has been criminalized unfairly, which is morally condemnable.”This latest judgment of the Tucuman Court is said to bear the signature of the President of the Court, Antonio Ghandur, and justices Antonio Estofán and Daniel Posse, who did not agree with the Attorney General’s initial recommendation, to keep Belén in detention prior to her trial. However, the judgment of the Court regarding Belén’s appeal of the 8-year sentence remains under review. Hence, her release appears to be conditional.A report by the UN Human Rights Committee, published on 15 July 2016, and other international organizations, including Amnesty International, demanded “measures for the immediate release of Belén in virtue of the violations of her rights that were committed, without respect for international human rights standards”.When they called for demonstrations, #LibertadparaBelén published a statement repeating the UN Human Rights Committee’s recommendation. The demonstrations on 12 August demanded that Belén must not be kept in prison for even one more day and called on the Court to overturn her conviction.Letter from prisonBelén wrote a letter from prison addressing her supporters who were in the streets that day, which was read out during each one of the events held throughout the country, in which she said:“In this society, many times in order to hide something, they look for someone to blame. They point the finger at those who cannot defend themselves and accuse them. No one listens to the accused. You are judged guilty because of your face, your clothes, for being poor or being a woman – like me. No one cared what I had to say. I told the truth, but nobody listened to me. I was guilty, that’s how I was seen. Everyone talked to me as if I were a monster. Now I feel that I am closer to receiving justice, that what I say has value. But each night when I go to sleep I think about the fact that I am in here, accused and condemned, while my accusers are outside. For them there is freedom, for me prison. This society is besmirched each day that passes without justice. For two years and four months I have been unable to go home or see my family. That is what I regret most, that they have separated me from my family. I hope that no one else will ever have to live what I am living.”We are all Belén 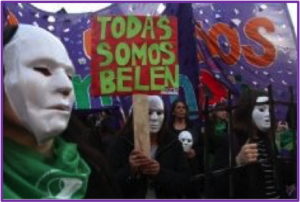