In a majority first step following the appeal against her prison sentence of 8 years and national demonstrations across Argentina on 12 August, “Belén” was released from prison yesterday evening around 7pm Argentina time. Today, página12 published two hard-hitting articles about the way events are turning: 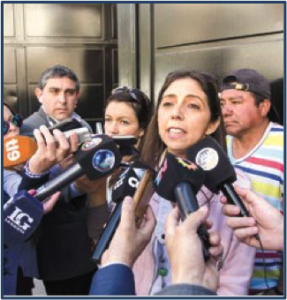 Condenas (Sentences)The three male Tucuman judges who arbitrarily sentenced Belén and treated her as prey as long as they could, starting with two years of unjustified preventive detention until her case was heard, are now seeking to apply another form of punishment, one that is not in the Criminal Code. When the Tucuman court ordered her to release, and knowing that the decision was imminent, her real name and surname were leaked to local media, presumably in order to amplify the damage to her. “Belén” is the pseudonym, used to protect her identity. More than 40 organizations committed to human rights, and both local and national media respectful of her right to privacy, managed to maintain a tacit agreement to call her “Belén”… Now, her name and surname are known. Soon, it is likely that her face will also be revealed. That from the three judges of the Criminal Court, Dante Ibáñez, Rafael Macoritto and Fabian Fradejas, who sentenced her. Now that her criminal conviction might be annulled, it seems they are applying social condemnation in defence of their verdict, in spite of numerous irregularities in how the case was handled… in support of the stereotype that weighs on women most: the unavoidable fate of motherhood. In this context, it should not pass unnoticed, something that is known in the Tucuman courts, that one of these three judges suffered the death of a daughter a few years ago, in an accident with a horse, and another has had difficulties to have a child. Might they not forgive Belén, then, for having had a miscarriage? In the justice system, unfortunately, prejudices also exist and affect judgments. The main victims – poor women.See: LibertadParaBelen for up-to-date news/photospágina12, Opinion, por Mariana Carbajal, 19 August 2016″The judicial system – easy to enter, difficult to leave”, said Belén’s solicitor, Soledad Deza, as she called for the three judges who sentenced Belén to be investigated for revealing her name to the media.página12, por Horacio Cecchi, 19 August 2016 ; Photo: Télam