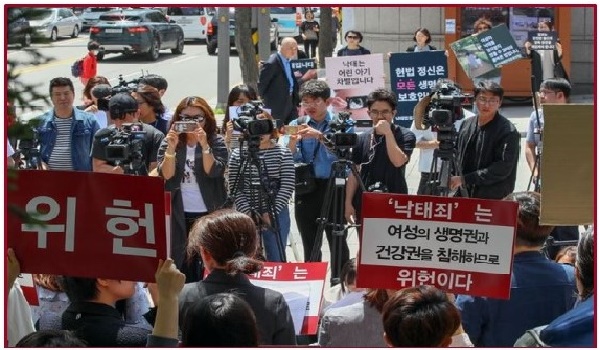 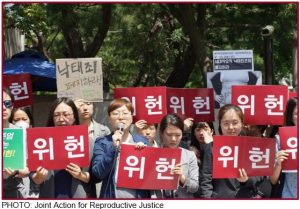 In 2017, following a petition that garnered a huge number of signatures and demonstrations in support of abortion law reform, a coalition of feminist groups, social movement groups and progressive parties was formed in South Korea, called Joint Action for Reproductive Justice.

On 24 May 2018, the coalition held a press conference in front of the Constitutional Court, where the Court was hearing a case brought by a doctor who had been criminally charged for carrying out abortions. The last time the abortion law was challenged, in 2012, the Court ruled to maintain the law. Although apparently rarely enforced, the law imposes a two-year jail term on doctors for conducting abortions, while women who have abortions are fined 2 million won ($1,850) or may face one year in jail.

Supporter of the doctor urged the Court to rule that the Criminal Code Sections 269 and 270 were unconstitutional and should be abolished, so that women can exercise their rights as regards pregnancy and sexuality and reproduction. They said that under the current law, only women are held responsible for unwanted pregnancies even though many other actors are involved in starting a pregnancy. They also referred to a ruling in which a woman was fined 2 million won for deciding to have an abortion even though she was being physically abused by a violent husband. Moreover, the current law infringes on women’s right to happiness, equality, life, and health.

Park Su-jin, one of the lawyers arguing the case, said motherhood must not be imposed on pregnant women. “Encouraging motherhood can only be done through the social welfare system, not by punishing abortion as a criminal offence,” she said.

The Ministry of Justice defended the ban in a statement to the Court and was criticised by local media for describing women as “those who have sex but reject its consequences of pregnancy and childbirth”. But their statement also acknowledged the need to widen exceptional cases for pregnant women suffering social and economic pressures, but that this could be accommodated through partial amendments to the current law.

“Framing the abortion issue as a battle between women’s self-determination and a fetus’s life frames women as perpetrators, murderers,” said gynaecologist Koh Kyung-shim, who testified on behalf of the accused doctor. “Since pregnancy and childbirth occur in the body of women, the issue of abortion should be discussed within the frame of the reproductive health and health rights of women. “The chance of giving birth occurs for a woman not once but many times. Women have rights to deliberately decide whether and when to give a birth, depending on their life plans,” she said.
Human Rights Watch sent an amicus brief to the Court saying that South Korea’s anti-abortion laws are incompatible with the country’s human rights obligations.

The Court is expected to announce its decision by September.